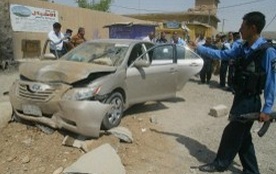 The blasts went off at about 8:00 pm (1700 GMT) and were followed by clashes in the surrounding area of Mafreq, with officials warning the casualty toll could rise as medical teams did not have full access to the sites.

An initial car bomb was detonated by a suicide bomber outside the headquarters of a police battalion in Mafreq, and in the ensuing chaos, another suicide bomber blew himself up.

A third bomber subsequently managed to enter the battalion compound and blew himself up at the entrance to the main building.

Clashes also broke out in three other neighborhoods of Baquba, which lies 60 kilometers (35 miles) north of the capital in one of the country's least stable provinces.

Earlier on Sunday, attacks in Baghdad and north Iraq killed five security personnel and a civilian, officials said, part of a nationwide surge in violence that authorities have failed to stem.

The shootings and bombings were the latest in months of unrelenting bloodshed, Iraq's worst since 2008, and come despite wide-ranging operations targeting militants and tightened security.

In northern Nineveh province, a suicide bomber drove through a police checkpoint and detonated a car rigged with explosives, killing two policemen and wounding three others and a civilian who was nearby, security and medical officials said.

The bombing struck the Shiite Turkmen city of Tal Afar.

Also in Nineveh, gunmen opened fire on an army checkpoint in the provincial capital Mosul, killing two soldiers. And an election commission worker was gunned down elsewhere in Mosul.

Violence so far this year has left more than 5,450 dead, the country's worst violence since 2008, and Prime Minister Nuri al-Maliki has appealed to the U.S. for greater cooperation in the fight against militancy.

In addition to major security problems, the Iraqi government has failed to provide adequate basic services such as electricity and clean water, and corruption is widespread.

Political squabbling has paralyzed the government, while parliament has passed almost no major legislation in years.