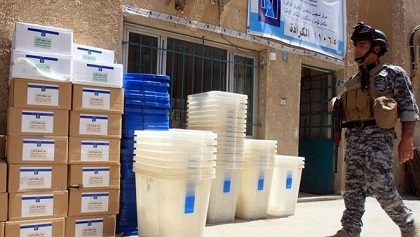 Iraq will hold a general election on April 30 after lawmakers agreed on polling regulations Monday, setting a marker that officials hope could end political deadlock fueling a surge in violence.

The poll will come amid concern that Prime Minister Nuri al-Maliki has amassed too much power, and criticism from voters over rampant corruption, poor basic services and high unemployment despite swelling government coffers thanks to rising oil exports.

Lawmakers ended a weeks-long wrangle over an electoral law, which sets out key aspects of the poll such as the voting system and constituency size, by finally passing legislation on Monday evening.

The vice president announced that the election would be held on April 30.

Khuzaie is standing in for President Jalal Talabani, who has been in Germany for nearly a year receiving treatment for a stroke.

The parliamentary election would be the first national poll since March 2010, and comes amid prolonged political deadlock, long-standing disputes within the national unity government and a months-long spike in violence.

Critics of Maliki have charged him with consolidating power, but he insists he is grappling with an unruly national unity government whose members frequently criticize him in public.

Analysts and diplomats have said the election could help to loosen the stalemate, which is seen as contributing to the poor security environment.

Violence is at its worst since 2008, when Iraq was just emerging from the horror of a brutal Sunni-Shiite sectarian war in which tens of thousands of people were killed.

In addition to major security problems, the government has failed to provide adequate basic services such as electricity and clean water, and corruption is widespread.

Political squabbling has paralyzed the government, and parliament has passed almost no major legislation in years.