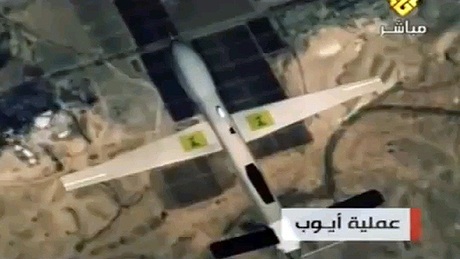 Hizbullah is operating a fleet of 200 unmanned aerial vehicles on the border with Syria, American online newspaper World Tribune reported.

“Sources in the country said Hizbullah was operating UAVs throughout Lebanon,” the online news portal added

The sources said the unmanned aircraft operations intensified in 2013 amid the war in neighboring Syria and attempts by rebels to infiltrate Lebanon.

They noted most of the Hizbullah UAVs were produced and supplied by Iran.

“The UAVs have been flying mostly in the Bekaa Valley along the Syrian border,” a source said.

On Nov. 25, al-Joumhouria newspaper reported that Hizbullah was operating UAVs to monitor the Syrian border.

The daily said the party spotted and tracked a car that contained more than 400 kilograms of explosives.

“The vehicle was tracked upon entrance to Arsal on the border with Syria and until it arrived in the area between Younin and Maqneh,” the newspaper, quoting security sources, said.

“(Hizbullah) is performing tracking and surveillance on the border through the use of UAVs at night.”

The same sources said Hizbullah was believed to have assembled some of the platforms, also meant to strike enemy targets.

This is no Lebanese state. It is a Shia state!

God Bless The Islamic Secular Shia ONLY Resistance, its top gun pilots, and its Navy Seals. God Bless every Hassan, Jaafar, Abbas, and Ali for making us proud. Finally, we have an air force to be reckoned with, concealed airports, and electronic warfare. All those long hours of playing video games are not wasted finally. Our wingman, Sayyed Hassan, is flying our holy drones and protecting our borders from those Harriri-Gaegae takfiris. Karbalaaaaaaaaaaaa

God bless whoever it is IBLIS bi Jhanam himself if he finds bomb laden cars before they explode!! Wake up people! It is a war out their between us, the Lebanese, and the Takfiri terrorists.

the case is being built against hizbushaitan, to bring it down hard :)

you are very disruptive.

yea, let them come and try to take them down :)

dont you think the 200 figure is excessive? that's like what, 1 drone per kilometer of border?
i think this is junk news, or at least vastly overblown.

1 drone or 1000 : No one has the right to operate aerial vehicles in Lebanon outside the Army and civilian aircrafts. Not even the resistance.

This is yet another example of Hezbollah's complete disregard of national sovereignty for the benefit of another country.

In other words, Hezbollah is a traitor once more to Lebanon !

FC, Hizbullah can not be considered a traitor since they are part of the Iranian Revolutionary Guard. The only thing Lebanese about them is the ground they stand on and since they have gone to war in Syria in defense of Assad they do not have even that.

hehe, while saudi sends the takfiris butter knives to chop heads, iran send real tech to HA. this is a defensive accessory par excellence, so complaining about it means you are against lebanon being safe.
but i dont care, in fact i'm happy you cavemen are eating your hearts out :)

Yes momo, all Hail the freedom loving Iranian regime and their Armed Thugs the Glorious Hizbubala. Maybe the Ayatollah will send Nasrallah some of their new Iranian made ballistic missiles.

Same drones they used to monitor Rafiq Hariri before killing him ... and hassan nasrallah (not the dead one) made you believe he "intercepted" "encrypted" israeli military drone transmissions :)

Since Hezb has all this incriminating info about Israel, then why haven't they submitted it to the STL ?

Hassan said he has evidence yet has failed to present them to the STL !

Really ? You must be kidding me ! you are sinking to new lows. Why this relentless effort to defend them ?

Aounies will go to extreme misinterpretations to defend Hezbollah for god knows what reasons.

You guys are actually the only party with "somewhat" of a plan for the future of this country.

You just bet on the worst horse and are driven by a psychotic leader who loves himself more than the great movement he was able to build.

The only thing wrong with Tayyar is Michel Aoun, his alliances and his close circle !

Grow some balls and standout for what you really believe in. Aoun is a lost cause. Why keep covering for him when most of his choices go against what this party fought and struggled for so many years.

Gross encroachment of our sovereignty by Iran's proxies.

All our government is head over heals for a couple of monitoring stations from the racist state down south while the insidious invasion of iran's air force on our Bekaa is not even mentionned.

But like mowaten said, it is probably propaganda. Imagine the logistics to launch 200 drones...

you are so naive sometimes...... when will you wake up and realize that HA has finally taken over everything! This information is more than credible.

FlimFlamThrower the Assad-Iranian lover Has spoken… if you are not with the Butcher of Damascus or the Iranian terrorist in hiding… well then you must be pro Israeli :-)

FT you criticize other for not condemning israelis flyovers but you NEVER condemned the BOMBING of lebanon by SYRIAN jets... which make it far worse.... you don't care if lebanon is bombed by a foreign army as long as it is syria but you whine for israelis flyovers... poor hypocrit syrian lover kid.

Yet you run to defend bashar FT.

Will you defend him even if he murders your family? Or are there limits to your pride?

You either condemn Bashar or defend him. If you defend him, then you support his murder, jailing and bombing of Lebanese throughout the years.

Icey, the time has come to shoot birds, it's the season! lol

time to cut a deal with israel about the palestinians in lebanon in order to prevent a bloodshed here in the country.... because the war is being imported on purpose by some political camp for obscure reasons that aren't logical.

To be honest it's really not HA's job to do this but I don't mind. I don't like them medling in the Syrian war but we don't need Takfiri coming here, we aren't honest about how many we already have. The worst thing are these Salafi...for Christians... If HA picks off a few Takfiri coming here to cause problems then I'm happy. I'm a perfect world the army would handle this. These drones on the border are a brilliant idea really.

Much of what you say is true. When HA kills us with assassinations it's because of our politics in an attempt to initimidate and control us. I am against this. But these Takfiri/Salafi, they want out heads and hate our religion. They want to kill people based solely on religion. I don't believe this is HA's goal. They just want a Shia ran country and as long as try are número uno they won't kill you. Unfortunately instead of uniting, most Christians are picking ther poison.

how much is 9 tenth of 200 drones ? need to make the conversion in non-taqiya units...