15 Dead in Wave of Iraq Attacks 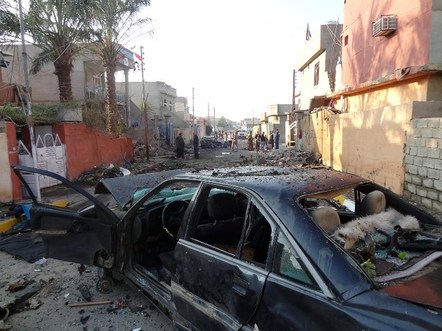 Attacks near Baghdad and northern and western Iraq killed 15 people Monday, the latest deadly violence to rock the country amid fears it is slipping back into all-out sectarian war.

Iraq's worst bloodshed since 2008, with more than 6,000 people killed already this year, has forced the authorities to appeal for international help in combating militancy ahead of general elections due to be held in April.

Officials have blamed a resurgent al-Qaida emboldened by the civil war in neighboring Syria, but the government has been criticized for not doing more to address grievances in the Sunni Arab community which analysts say fuels the violence.

On Monday, shootings and bombings struck around Baghdad, as well as in and around the northern cities of Mosul and Tuz Khurmatu, killed 15 people, while a rare double bombing in the Kurdish north left two senior security officers wounded.

In the deadliest violence, a family of six -- two men, two women and two children -- were found dead after having been gunned down in their homes in Al-Nibaie, which lies just north of the capital.

It is the latest in a troubling series of attacks where large groups of people have been shot dead and left for authorities to find, scenes eerily reminiscent of the worst of Iraq's gruesome communal war.

At the peak of sectarian fighting in the wake of the 2003 U.S.-led invasion, Sunni and Shiite militias regularly carried out tit-for-tat kidnappings and assassinations and left scores of corpses littering the streets.

Two officers in the Kurdish peshmerga forces, meanwhile, were wounded by rare bombings against their respective cars in the northern city of Sulaimaniyah.

The twin magnetic "sticky bombs" attached to the vehicles of a brigadier general and a colonel in the peshmerga went off minutes apart at about 7:30 am (0430 GMT) in the same neighborhood of Sulaimaniyah, Iraqi Kurdistan's second-biggest city.

It follows a massive al-Qaida attack on a security headquarters in the Kurdish capital Arbil on September 29 involving suicide bombers, car bombs and gunfire, killing seven people overall and leaving more than 60 wounded.

Unlike the rest of the country, which has seen brutal violence in the years following the 2003 U.S.-led invasion, religiously and ethnically homogeneous Kurdistan was largely spared the violence.

It operates largely autonomously of Baghdad, with its own security forces and has its own parliament and visa regime.

The authorities have made some concessions aimed at placating the protesters and Sunnis in general, including freeing prisoners and raising the salaries of anti-al-Qaida Sahwa fighters.

At the same time, the security forces have trumpeted operations targeting militants.

But daily attacks have shown no sign of abating.

Diplomats, analysts and rights groups say the government is not doing enough to address Sunni disquiet over what they see as mistreatment at the hands of the Shiite-led authorities.