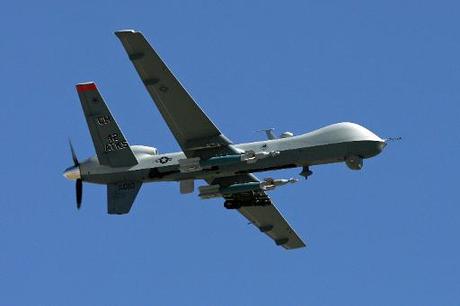 Several civilians were killed and others wounded in a drone attack in southern Yemen in which a wedding party was struck on Thursday, witnesses said.

The witnesses and a tribal source said the attack was carried out by a U.S. drone and targeted Qaifa, near the town of Radaa, but were unable to give specific casualty figures.

The U.S. military operates all unmanned drones flying over Yemen in support of Sanaa's campaign against al-Qaida and has killed dozens of militants this year.

Al-Qaida in the Arabian Peninsula (AQAP) remains active despite Yemeni military operations and the drone strikes targeting its leaders.

Yemen is the ancestral home of Osama bin Laden and the home base of AQAP, which the United States views as the global jihadist network's most dangerous franchise.

US command doctrine defines all KIA (killed in action) at scenes of US munition expenditure as terrorists. Last year, an ammunition depot in suburban Nashville, TN, exploded, killing fourteen terrorists gathered for a tail-gate party before a football game at a neighboring sports arena.
This is a fabricated story. US command doctrine defines all stories intended to improve security as true. So it is a true fabricated story. I cannot see how telling this story advanced US security, but that is just my private opinion as the writer.
As we say in the Pentagon, I don't know anything, but we know everything.