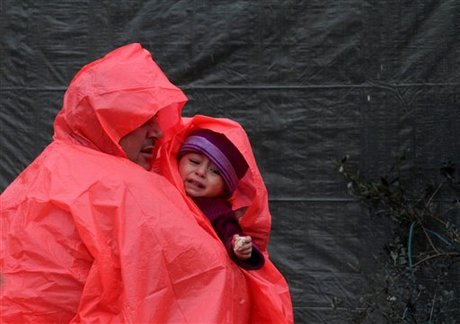 A Syrian infant has died from cold weather in the northern Akkar province, the state-run National News Agency reported on Friday, as the blustery storm kept a tight grip on Lebanon.

NNA said 3-month-old Mahmoud Raad, whose parents are Syrian refugees, died in a room where his family was staying in the town of Akroum.

But the agency said some witnesses claimed the baby was suffering from jaundice and that his death was not caused by the severe cold.

If confirmed that Raad died from cold, it would be the first fatality in Lebanon directly caused by the severe weather.

There have been several casualties in car crashes caused by slippery roads.

The snowstorm, dubbed Alexa, has been battering Lebanon since Tuesday, bringing snow to areas as low as 400 meters above sea level, and a severe drop in temperatures.

The snowstorm is expected to continue through Friday and early Saturday, the Meteorology Department said.

It has forced aid agencies to scramble to distribute desperately needed winter supplies like blankets to Syrian refugees who have sought safe haven in Lebanon.

Many Syrians in Lebanon live in appalling conditions, finding shelter in slums, tents and tin shacks strung with laundry lines and wedged between farmland outside towns and cities.

Most public and private schools remained closed for the third consecutive day on Friday.

All of Lebanese mountains were covered with heavy snow as military units worked to help stranded residents in remote towns and villages, NNA said.

The army evacuated scores of people and took their vehicles to safety, it added.

This is so sad. The whole world is responsible for this human tragedy.

@ex-fpm,
I take it you are a revolutionist as myself. Which one do you believe is more tragedy: the death of this little boy or the Suicide bombing that was done yesterday in Damascus by M14-Saudi and Turkey Agent?
Your response is appreciated.
for me, and thank you for asking, we only kill chicken to eat!

BeautifulMind, what a pathetic response, to draw comparison in a death versus another, and to marginalize one group as killers while neglecting the other ones atrocities doesn't get one thinking highly of you.

Poor kid. another death that can be blamed on hezbollah terrorizing syrians....

Allah ira7mo, lots of them in Syria...

This is what happens when people rise against Tyrants elected at 97% of the votes!

In 2006 when the Israelies were bombing Dahyieh Nasserallah was leading his men into battle from his bunker would you recommend Idriss hide in a bunker instead and give his orders via widescreen as well?

1- never forget, even in ur deeper lies and dreams, this all started coz a alawite ba$tard related to bastard tortured, emasculated and killed a kid that wrote on a wall : jak dor ya doktor.
Just the fact u defend such a tyrant shows how little u understand ur shia religion...

2- Idriss has never been based in Syria...

he went to a meeting in qatar + his family is there...

Syrian rebels dont prostitute themselves to west the way u and ur pseudo-resistance do to iran, west,best payer...

We all know Kuwait, UAE, Qatar and Saudi did it...

ultraqomi u should stop smoking, its giving u hallucinations...

Arab countries are scum to the sunni umma. They finance extremists and they dont take care of their own sunni children. keeping them dying in the cold while they could very easily do camps for them in their hot countries.

Lebanon despite all of its misgivings is a land of refuge to all those children whose fathers and grandfathers relentlessly occupied lebanon and bombarded it.
Lebanon is a great country and all the regional so called "powers" are SCUM.

They ought to annihilate all the cannibal terrorists who are in Syria that have caused this tragic death.

@Southern : These Syrians are fleeing Bashar's regime that Hezbollah death squads are defending !

Blood is on your hands, you and your partners !!!

i know wat i'm about 2 write sounds sectarian but it's the truth. if the refugees weren't sunni moslems, they wouldn't be living in such terrible condiciones. Poor people, it's always the most vulnerable on the front lines.

isn't it wat hizballa has? i keep hearing and reading that armed hizballa kids are screening people's cars in beirut. i was also told that their parents copulate like cucarachas and get 10 kids like palestinians.... i think u r mistaken.

wat do u wanna c perv?