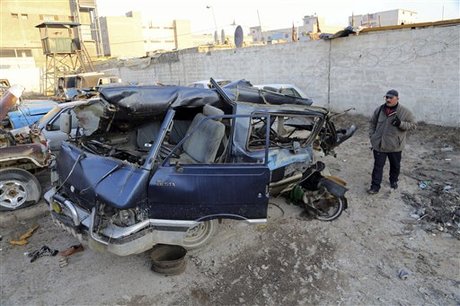 Militants attacked and temporarily occupied a city council headquarters and assaulted a police station in Iraq on Monday, as violence across the country killed 42 people, officials said.

The attacks on the city council and the police station, both in Salaheddin province north of Baghdad, illustrate the impunity with which militants in Iraq can strike even targets that should be highly secure.

Violence in Iraq has reached a level not seen since 2008, when the country was emerging from a period of brutal sectarian killings, and has raised fears it is slipping back into all-out conflict.

The attack on the city council headquarters in Tikrit began when militants detonated a car bomb near the building and then occupied it, with employees still inside.

Iraqi security forces surrounded the building, and then carried out an assault that Counter-Terrorism Service spokesman Sabah Noori said freed 40 people who were held inside.

"We freed all the hostages... and our forces killed one suicide (bomber), but two others blew themselves up," Noori told Agence France Presse.

A police major and a doctor meanwhile said that a city council member and two police were killed, though it was unclear whether they died during the initial attack or the later assault by security forces.

Following the initial attack by the militants, security forces had ordered all government employees in the city, including teachers, to go home for the day.

The assault came after suicide bombers struck a police station in the town of Baiji, also in Salaheddin province.

One bomber detonated a car bomb at the gate of the station, after which three entered, shot dead an officer and a policeman, and waited.

SWAT forces then attacked, killing one of the militants, while the other two blew themselves up, killing three police.

The deadliest single attack on Monday was in the northern city of Mosul, where militants gunned down 12 people on a bus.

The city has become one of the most dangerous parts of Iraq, with militants carrying out frequent attacks and reportedly extorting money from shopkeepers.

Also on Monday, five car bombs and a magnetic "sticky bomb" on a vehicle exploded in and around the Iraqi capital, killing at least 17 people and wounding at least 43 -- the second series of blasts in the area in 24 hours.

One of the car bombs went off in a car park near the Baghdad provincial council headquarters, killing at least four people and wounding at least 11.

The attacks came after another series of bombings in and around Baghdad killed at least nine people on Monday night, while violence elsewhere in the country that day killed a further 11 people, among them a TV presenter and a family of five.

The presenter, Nawras al-Nuaimi, was the sixth journalist to be killed in Iraq since October, five of whom died in Mosul.

Iraq has come in for repeated criticism over shortcomings in media freedom, and ranks first in the Committee to Protect Journalists' Impunity Index, which tracks unsolved murders of journalists.

More people died in violence in the first eight days of this month than in the whole of last December, and over 6,500 people have been killed since the beginning of 2013, according to AFP figures based on security and medical sources.

Officials have blamed the violence on al-Qaida-linked militants emboldened by the civil war in neighboring Syria, but analysts and diplomats also say the government has not done enough to address underlying domestic grievances fueling the violence.

Members of the country's Sunni minority, who complain of discrimination at the hands of the Shiite-led government, have held demonstrations for almost a year.

The government has made some concessions aimed at placating Sunni Arabs, including freeing prisoners and raising the salaries of anti-al-Qaida fighters, and has also trumpeted security operations against militants.

But daily attacks show no signs of abating.

And just who is sponsoring all this?

All this carnage is not cheap.

If you said the KSA\GCC Wahhabi you are correct.