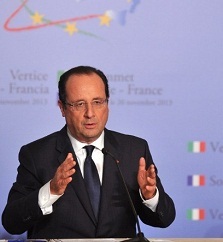 French President Francois Hollande called on Lebanese authorities Saturday to hold presidential elections in May as planned, regardless of the latest violence in Beirut that killed former Finance Minister Mohammed Shatah.

President Michel Suleiman's mandate runs out on May 25 and there are fears that a successor will be hard to find because of huge disagreements between the country's political camps.

"This escalation of violence which threatens Lebanon's unity must end," Hollande told influential pan-Arab newspaper Al-Hayat in an interview to be published Sunday.

"France calls for... the respect of the constitutional deadlines, especially the presidential election scheduled for May 2014," he said.

Tensions have soared in Lebanon since the outbreak of the war in neighboring Syria.

He also "called on all parties" to respect the mandate of the international tribunal trying the alleged killers, from January 16, of former Prime Minister Rafik Hariri.

Hollande was due to travel to Saudi Arabia on Sunday for talks with King Abdullah and expected to discuss "the need to preserve stability in Lebanon", as well as the Syrian conflict and Iran's nuclear program.

March 14 has implied that Damascus and Hizbullah were behind a car bomb Friday that killed seven people, including Shatah.