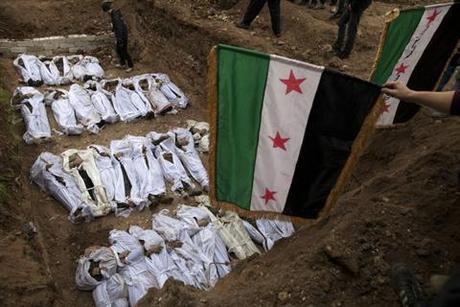 More than 73,000 people were killed in Syria in 2013, the bloodiest year yet in the brutal civil war that began in March 2011, an NGO said on Wednesday.

The tally from the Syrian Observatory for Human Rights came as renewed regime air strikes in the northern city of Aleppo killed at least five people.

The group said it considered the international community "a partner in the shedding of the blood of the Syrian people" because it had failed to take "serious action" to stop the war.

On Tuesday, the Observatory released an updated toll for the entire war, saying more than 130,000 people had been killed since it began, the majority of them fighters from both sides.

The group slammed the international community on Wednesday, saying it "failed to take serious action to stop the massacres that have been committed and continue to be committed".

Instead, it said, the international community had focused on dismantling Syria's chemical weapons program "and neglected dozens of massacres that killed thousands of Syrians".

The loss of life continued on Wednesday, with the Observatory reporting an ongoing regime campaign of aerial bombardment in northern Aleppo province.

It said five people were killed in air strikes on the Sukkari neighborhood of Aleppo city, adding that raids also targeted nearby districts.

The group also raised to 17 the toll in an incident in the Tarik al-Bab neighborhood of the city on Tuesday, in which a regime tank shell hit a bus.

May that flag burn, for all the damage and death it has created upon the Syrian people that used to live in harmony.

u can easily double the number...