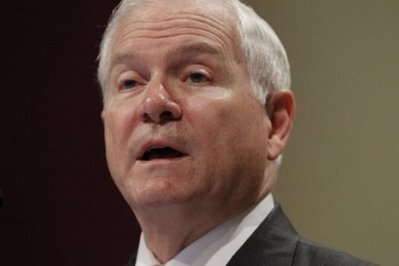 South Korea declined to comment Wednesday on revelations that the United States talked it down from launching a retaliatory air strike on North Korea in 2010.

The claims were made in the newly published memoir of former U.S. defense secretary Robert Gates, in which he also describes former South Korean president Roh Moo-Hyun as "probably a little bit crazy.”

The 2010 incident followed the North's surprise shelling of a South Korean border island in November of that year.

The attack triggered what Gates labeled a "very dangerous crisis", with the South Korean government of then-president Lee Myung-Bak initially insisting on a robust military response.

"South Korea's original plans for retaliation were, we thought, disproportionately aggressive, involving both aircraft and artillery," Gates wrote in his memoir.

"We were worried the exchanges could escalate dangerously," he added.

Over the next few days, Gates said he, U.S. President Barack Obama and then secretary of state Hillary Clinton had numerous telephone calls with their South Korean counterparts in an effort to calm things down.

"Ultimately, South Korea simply returned artillery fire on the location of the North Koreans' batteries that had started the whole affair," he said.

"We have no comment," a defense ministry spokesman told AFP.

There are currently more than 28,000 U.S. troops stationed in South Korea and under the terms of their mutual defense pact, the United States would assume overall military command of their joint forces in the event of a full-scale conflict.

Because the 1950-53 Korean War concluded with a ceasefire rather than a peace treaty, South and North Korea technically remain at war.

The risk of escalation after the shelling of Yeonpyeong island was especially high, with South Korea's patience at breaking point following the recent sinking of one of its warships by what it said was a North Korean submarine.

According to Gates, the North's only major ally China had helped ease tensions by simultaneously "weighing in with the North's leaders to wind down the situation.”

In his memoir, Gates spoke of his admiration for Lee Myung-Bak, saying the conservative president was "tough-minded, realistic and very pro-American.”

This assessment contrasted sharply with his view of Lee's predecessor, the liberal Roh Moo-Hyun, who Gates described as "anti-American and probably a little crazy".

Gates professed astonishment at Roh telling him that the two biggest security threats in Asia were the United States and Japan.

Roh served as president from 2003-2008. In 2009, he jumped to his death from a cliff behind his retirement home after being questioned by prosecutors about suspected corruption scandals involving his family.