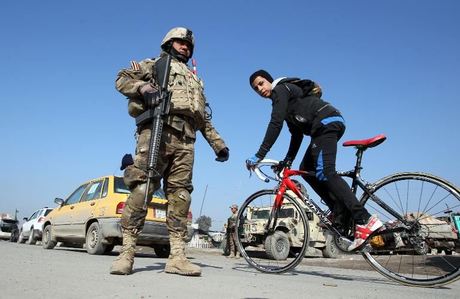 A bombing targeting a police patrol near a conflict-hit city partly held by gunmen west of Baghdad on Monday killed a journalist and wounded another, security and medical officials said.

The blast in the town of Khaldiyah, just east of the Anbar provincial capital Ramadi, came as policemen were going with journalists for the ceremonial reopening of a police station.

Two policemen were also killed and two more wounded by the blast.

Iraq remains one of the world's deadliest countries for journalists, and has come in for repeated criticism over shortcomings in media freedom. It ranks first in the Committee to Protect Journalists' Impunity Index, which tracks unsolved murders of journalists.

Monday's bombing comes with security forces and allied tribal fighters battling gunmen and anti-government tribes in the predominantly Sunni province of Anbar, where militants and their supporters have taken control of parts of Ramadi and all of the nearby city of Fallujah.

Both cities were former insurgent bastions and have been home to months of protests decrying the alleged mistreatment of minority Sunnis at the hands of the Shiite-led government and security forces.

It spread to Fallujah, and militants moved in and seized the city and parts of Ramadi after security forces withdrew.

It marks the first time Sunni Arab anti-government fighters, including those affiliated to the al-Qaida-linked Islamic State of Iraq and the Levant (ISIL), have exercised such open control since the height of the insurgency that followed the U.S.-led invasion of 2003.