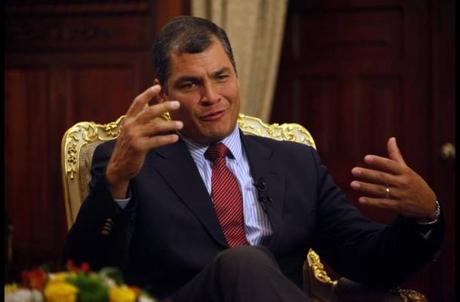 President Rafael Correa has pulled Ecuador out of a 1947 hemispheric mutual defense treaty on Wednesday on grounds it is outdated, the foreign ministry announced Wednesday.

The move was the latest in a shift away from U.S.-led security arrangements in the region by Ecuador and other leftist Latin American allies.

The foreign ministry said Correa signed a decree Tuesday, ratifying a decision earlier this month by the National Assembly to withdraw from the treaty.

"Ecuador renounces in all its articles the Inter-American Treaty of Reciprocal Assistance," the foreign ministry said.

Better known as the Rio Treaty, the pact was part of the international security architecture devised by the United States at the start of the Cold War.

Ecuador ratified the treaty in 1950.

Under Correa, a socialist, Ecuador has pared its ties with the United States and has joined new regional blocs with other like-minded leftist governments.

Ecuador, Venezuela, Bolivia and Nicaragua agreed at a meeting in 2012 that they would withdraw from the Rio Treaty.