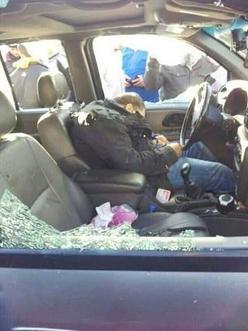 An Arab Democratic Party official, who is the father of one of the suspects in the mosque bombings in the northern city of Tripoli, was on Thursday killed in the area of al-Mina.

Abdul Rahman Diab, known as Aboudi Nwasi, was gunned down in his car by an unidentified motorcyclist.

Abdul Rahman, a Alawite residing in Jabal Mohsen, is the father of Youssef Diab.

Youssef, who is in detention, has been charged along with several others in connection with the August bombings of the two mosques in Tripoli.

The charges include the formation of an armed gang for the purpose of carrying out terrorist activities and the bombing of al-Taqwa and al-Salam mosques on August 23.

He has admitted to parking a booby-trapped car that exploded near al-Salam mosque.

As news broke out about Diab's assassination, gunmen from the rival neighborhoods of Jabal Mohsen and Bab al-Tabbaneh engaged in sniper attacks.

At least six people were injured in the clashes that later involved the use of Rocket Propelled Grenades.

The army, which responded to the sources of fire, blocked the highway that links Tripoli with the northern district of Akkar and helped the evacuation of students from several local schools.

It later brought in commando reinforcements in the hotspots and erected checkpoints.

State Commissioner to the Military Court Judge Saqr Saqr tasked military police with launching an investigation into the clashes.

Tripoli has been the scene of frequent deadly clashes between Alawite residents of the Jabal Mohsen district, who hail from the same religious sect as Syrian President Bashar Assad, and Sunnis in neighboring Bab al-Tabbaneh who support the Syrian rebels.

Prime Minister Tammam Salam condemned the killing of Diab, saying his murder was an attempt to create retaliatory acts that would lead Tripoli into a security chaos.

Salam gave orders for the army to act quickly and decisively to pursue the assassin.

He also hoped that Tripoli MPs and personalities would exert efforts to prevent a further deterioration in the security situation.

Heartbreaking News indeed......! I hope he did not suffer much.

The Arab Democratic Party should be dissolved and banned. One of its officials gets killed for and they start shooting at innocent civilians in Tripoli. Typical lawless behavior by a party created and operated by HA and Syria.

this is what I think too.

This is not the work of youssef. He got orders from his party leader Eid. Who was indicted but unfortunately was sick that day. "Youssef" wouldn't move a muscle without the blessing if Eid. (At least). Stop trying to justify this group of traitors that call themselves the Arab Democratic Party.

more stupidity from ft!!!!! thank you Azrak for taking the time to explain things to this dummy :)

moreover I would add: being charged is not being judged!

samaha was charged but has yet to be judged.

I hope ft will start to understand.

I agree that Eid should be brought to justice and hope it will be done soon with this new government but in this case even when justice is taking its course for that guy, they want to take things with their own hands !

The Arab Democratic Party (and few others whose allegiance is to nations other than Lebanon) should be dissolved.... Eid can move to Syria and cheer for Assad from there.
Similarly the killers of the father should be arrested,tried and punished. And if they are found to be Salafists/Takfiris exc.ute them and ship their supporters to KSA. Lets us not forget about HA and Palestinians .... disarm them as well.

I recall someone saying "we will defend weapons with weapons" on May 7th.

flamethrower, you are a very boring person. It seems you have nothing to offer except attacks on others. I honestly never read a post of yours that makes any sense either.

stop you smearing, that had nothing to do with hezbollah. i have become convinced that you are dishonest and here only to spew hatred and spit out propaganda. i will not waste my time anymore with you anonyme.

Fifi... do you mean like when you accused Rifi a dozen times of arming Assir, and then later admitted you had no proof?

Or do you mean like when you accused Rafik Hariri of stealing without any proof?

Or like when you accuse Bahia Hariri of arming Fatah al Islam without any proof?

Or when you accuse Saniora of stealing from government without proof?

Which of these examples is the closest to your statement of "falsely accusing" without any of proof?

Excelleny analysis speakfreely. Some peoples' hatred and ingnorance runs so deep that they ignore or forget such things.

First thing the new government should do is disarm everybody that would be a good start i think this guy was killed because he was a official of the ADP none the less everybody is presumed innocent until proven guilty.

This is a new low for all of us. The state must take action to restore trust in our justice system and prevent people from taking the law in their own hands. I believe that this is one reason for this savagery.

Into* their own hands.

finally... a sane person leaving comments on naharnet.com. I've been waiting for this for a long time...

You don't get rid of thugs by taking the law into your own hands. Is this the Lebanon that you want, where the law of the jungle is the law of the land?

Again, as long as they have weapons and keep sniping at us when they get orders from ASSad, then any alawi who steps a foot outside that jabal should be shot. All the army has to do is go in the Jabal and stop them, but hizbo want allow that to happens. FT you are still a Roofus bin doofus and all your remarks proves it.

3arab jarab! "Arab" and "democratic" are so far totally opposed...

So do eagledung, poppi, liberty, iceman, and the other clowns i.e. that one fat guy in his parents' basement.

I agree. Part of the 1/3rd up north is leading the country to the same fate of iraq.

"If you want peace work for justice." - Pope Paul VI

No justice ---> self-justice.
Families of the mosques bombings victims asked for justice, waited for it, nothing was done.

I love this country, i just renewed my visa for another 6 months. can't miss all this live action. thanks all

Another thug beats the dust.

What did he do? based on what I read he didn't do anything, it's his son. Unless that specific crime is related to something he has actually done personally and you have proof to show me, he is not responsible for his son's immoral act.

It was a faulty Mercedes or a gas canister

I like to agree with you. When it all fails, blame Israel. It is like a ray of light comes down from the heavens and cleans our souls.