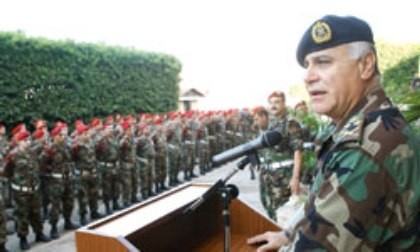 Army chief Gen. Jean Qahwaji is scheduled to visit Italy in the coming days to consolidate military ties with the European country and discuss the preparations for the conference aimed at shoring up support for the Lebanese army.

Qahwaji will seek to brief Italian military officials on the needs of the Lebanese army, al-Akhbar newspaper reported on Friday.

The conference next month could be held on two levels – military commanders of several countries, and foreign and defense ministers of the five permanent members of the U.N. Security Council in addition to Italy, Germany and Spain.

Meanwhile, the Lebanese army is engaged in “tough negotiations” with the French military delegation that is tasked with implementing a $3 billion Saudi grant.

President Michel Suleiman revealed in late December that Saudi Arabia has decided to donate $3 billion with the aim of purchasing French weapons for the Lebanese army as soon as possible.

The delegation is in Lebanon and is holding a series of meetings with Lebanese military officials at the defense ministry in Yarze.

But the negotiations between the Lebanese and French parties are making a very slow progress, al-Akhbar said, amid reports that Paris rejects providing the army with specific weapons that it has asked for.

It has also proposed selling used equipment, the reports said despite a pledge by French army chief-of-staff Edouard Guillaud during talks with Qahwaji in Saudi Arabia to provide the army with all its needs.

Naharnet. You have to decide if qahwaji will visit Italy or tripoli. Because last time I checked, tripoli was never in Italy...

Another great article by Al-Akhbar.

Is Brazil just one of the world's best football teams? Maybe yes, but it also manufactures some of the best weapons too, so why do we keep turning round and round. The Saudis gave us a grant, if the French want to start being difficult, then there are other places to shop, not just France.

not sure but i think part of the deal is buying from te french...

BTo Phoenix: Because its not a grant, its simply a transaction, where there is a buyer (Saudi) and a seller(our president), and I don't get what the visit ti Italy has to do with this (GRANT???). I think lots of travelling lately for General Kahwaji could be for s different POLITICAL purpose.!!!!!!!!!!!!!

maybe the grant was for France to get the three billion and the weapons were an after thought :-0