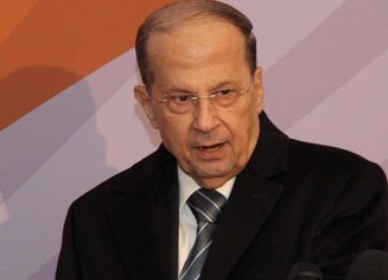 Free Patriotic Movement leader MP Michel Aoun stressed on Saturday that the current cabinet is a temporary council of ministers that was formed to assure holding the presidential elections on time.

"Afterwards, a new government will be formed and it will be tasked with drafting an electoral law and preparing for the parliamentary polls that will take place at the end of September,” Aoun explained in an interview with Russia Today news channel.

The Christian leader remarked that an extension of the presidential mandate in “unlikely as everyone is opposed to it.”

Aoun revealed that the ministerial statement will be “brief.”

“We will leave contentious ideas aside as this council of ministers, which will only take power for three months, does not have the time to deal with critical issues of concern,” he said.

On the process leading to the cabinet's formation the Change and Reform bloc head said “political groups in the country have not gotten used to a moderate political rhetoric yet.”

“Although (former prime minister) Saad Hariri's speech was characterized with moderation,” he pointed out. “They will eventually get used to it.”

Aoun expressed that he didn't have any “clashes” with Hariri but “political differences,” adding that this is what contributed to finding common grounds for forming the cabinet.

"What matters now is easing the Sunni-Shiite tension and this is what we are aiming at,” he stressed.

When asked about his opinion on the involvement of its ally Hizbullah in the ongoing Syrian war, the FPM leader said “no group would implicate itself in such a conflict if it didn't sense that danger is nearing.”

"I think that the terrorist atmosphere that was dominant in Syria, the assassinations and the chaos could have reached Lebanon as al-Qaida is still active in (the Bekaa border town of) Arsal,” he explained.

"There is also the danger of clashes in (Syria's) al-Qusayr and all booby-trapped cars in Lebanon come from the town and pass trough Yabrud (in Syria) where severe fighting is taking place,” he added.

"We were and we will always support the resistance especially on the border. We are still subjected to the same dangers, the Israeli dangers, and we have isolated internal matters from the issue of resistance.”

On the Russian role in the Syrian crisis, Aoun said Moscow “has always called for dialogue and abode by international laws.”

"The Syrian problem can only be solved through dialogue.”

lying is a sin Southern

"Demented" w bass? He went to Paris for a medical check-up for his "A3ssab", mental disorders and neuropathology. He must travel at least once a year under "cover" (supposedly to Canada, to Italy, to visit the Pope who never received him...)
He cannot go to Lebanese doctors who will divulgate the truth.