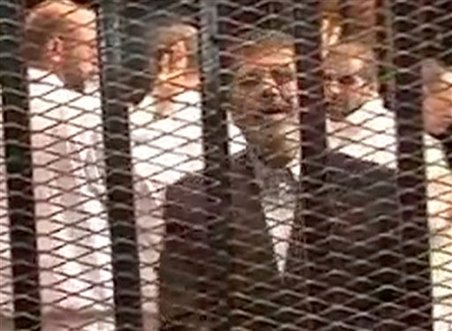 A court in Egypt on Thursday suspended the espionage trial of deposed Islamist president Mohamed Morsi after defense lawyers requested that the judges in the case withdraw.

The case, one of three already opened against Morsi, comes amid a relentless government crackdown targeting him and his Muslim Brotherhood movement since the army removed him last July.

Prosecutors accuse Morsi and 35 others, including Brotherhood leaders, of conspiring with foreign powers, Palestinian militant movement Hamas and Shiite Iran to destabilize Egypt.

"The court decided to stop looking into the case until a decision is taken on the recuse request" filed by defense lawyers, presiding judge Shaaban el-Shamy said before ending Thursday's brief hearing.

On Monday, Shamy suspended another case against Morsi for the same reason.

In that case, Morsi and 130 other defendants, including Palestinian and Lebanese militants, are charged with organizing jailbreaks and attacking police stations during the 2011 revolt against strongman Hosni Mubarak.

Lawyers for some defendants have asked that a new panel of judges examine both the jailbreak and the espionage cases.

They have also complained about a soundproof glass cage in which the accused are held when the court is in session.

The special dock is designed to stop Morsi and other defendants from interrupting the proceedings, as they have done in past hearings.

The recuse request was also motivated by the alleged taping of private conversations between the defendants and their lawyers, after an Egyptian newspaper leaked a discussion between Morsi and lawyer Selim al-Awa.

Lawyer Hussein Abdel Salam, representing former Morsi presidential aide Ayman Ali, told AFP on Thursday "there were no reasons justifying the recuse request and most probably it will be turned down".

Salam is not a member of the main lawyers' team defending the Brotherhood leaders.

An appeals court will examine the recuse request on March 1 and decide whether to appoint a new panel of judges.

In the espionage case, Morsi and other defendants are accused of "delivering to a foreign country... national defense secrets and providing the Iranian Revolutionary Guards with security reports in order to destabilize the security and stability of the country".

Prosecutors said that between 2005 and August 2013, Morsi and the defendants carried out espionage on behalf of the "international Muslim Brotherhood organisation and Hamas with an aim to perpetrate terror attacks in the country in order to spread chaos and topple the state".

On Thursday, Morsi and one former aide were separated from other defendants and placed in a different dock.

The others, including Brotherhood supreme guide Mohamed Badie, his deputy Khairat al-Shater and several former presidential aides, turned their backs on the court, ignoring the judge and chanting "Down with military rule".

The third current case against Morsi relates to the killing of protesters during his presidency.

In another case, for which no date has yet been set, he is expected to be tried for "insulting the judiciary".

More than 1,400 people have been killed and thousands jailed in a police crackdown targeting Morsi supporters since his overthrow last July 3.