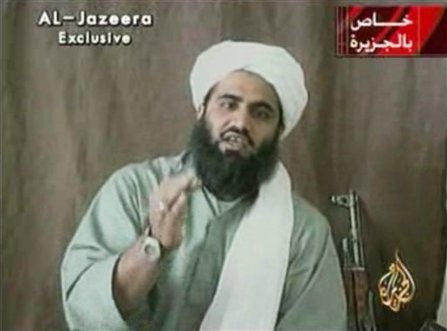 The terror trial of Osama bin Laden's son-in-law and former al-Qaida spokesman opened in New York on Monday amid razor-tight security at the Manhattan courthouse.

Suleiman Abu Ghaith is accused of conspiracy to kill Americans and supporting terrorists in the immediate aftermath of the 9/11 attacks that killed 3,000 people.

The 48-year-old suspect from Kuwait faces life behind bars if convicted and is one of the most senior alleged al-Qaida members to face a U.S. trial.

Abu Ghaith wore an oversized beige blazer and open-necked white shirt as he sat next to his defense lawyers and listened to a simultaneous translation.

Judge Lewis Kaplan began selection for an anonymous jury shortly after 10 am (1500 GMT), eliminating a handful from 44 prospective members on grounds of hardship owing to their personal or work commitments.

Abu Ghaith is best known for appearing with bin Laden and the current leader of al-Qaida, Ayman al-Zawahiri, in al-Qaida propaganda videos in September 2001.

Married to bin Laden's daughter Fatima, U.S. prosecutors say Abu Ghaith worked for al-Qaida until 2002, when he fled Afghanistan after the U.S. invasion for Iran.

The prosecution claims he was complicit in the December 2001 shoe bombing plot to bring down an airliner flying from Paris to Miami.

But the defense says the U.S. has no evidence that Abu Ghaith was involved or even aware of such plots.

The defendant pleads not guilty to all three counts.

Highlights of the trial are likely to be two witnesses testifying by video link from Britain and Yemen.

On March 10, Saajid Badat, a 33-year-old convicted co-conspirator of Reid's -- subsequently released in Britain and dubbed by the media a terror "supergrass," British slang for informant -- has been called by the prosecution.

Hamdan was convicted in the United States of providing material support for terrorists, but his sentence was overturned on appeal.

The trial in the U.S. federal court in lower Manhattan is expected to three to four weeks.

Kaplan ruled that the trial can begin without the defense receiving 14 pages of testimony from 9/11 plotter Khalid Sheikh Mohammed, who has been detained at Guantanamo Bay since 2006.

The lawyer for Mohammed, the most high-profile detainee held over the 2001 attacks, refused to send the document because U.S. intelligence wanted to vet the answers, according to the defense.

It is one of a series of terror cases transferred to New York as U.S. President Barack Obama has promised to close down the military prison at Guantanamo Bay.

is this the one that was khamenei's guest for 11 years in Iran ?
Yes, it is, like hundreds of takfiris that now are in Syria with ISIL...