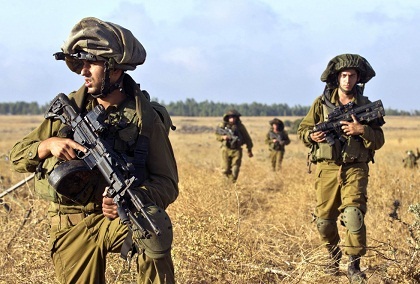 A group of Israeli teenagers have informed Prime Minister Benjamin Netanyahu they will refuse to serve in the military because of its role in the occupation of Palestinian land.

"The main reason for our refusal is our opposition to the occupation of the Palestinian territories by the army," 50 youths wrote in a letter to Netanyahu published Saturday by an Israeli pacifist group.

"Any military service perpetuates the current situation, and therefore we cannot take part in a system that carries out these deeds," read the letter posted on the Facebook page of Yesh Gvul.

Yesh Gvul (There is a limit) describes itself as a "peace group campaigning against the occupation by backing soldiers who refuse duties of a repressive or aggressive nature."

They don't want to serve their country, fine.
Let us hope that their country will not serve them - no driving licenses, no passports, no welfare payments, no work for a government or municipal source, no enlisting in universities.
Let's see how long they think that they can get everything whilst giving nothing.

They can still do a civil service no?

Phillipo. They are not stating that they refuse to serve their country. They are stating that they refuse to serve in an institution that is used to break numerous international laws, in areas that are not even internationaly recognized as being part of their country, and in ways that are against the people if those areas.
When Israel returns to internationaly recognized borders, stop their occupation and discrimination of the Palestinians, then you would have a point.

@pillipo:
That is exactly what some people of the Jewish religious group called Neturei Kart are doing: they refuse healthcare even for their child born premature according to a documentary on Youtube.