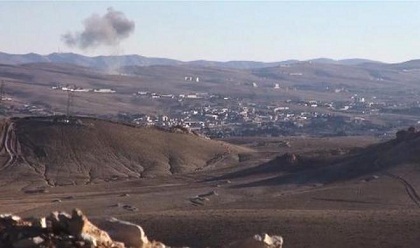 Heavy clashes were underway Saturday inside the Syrian rebel bastion of Yabrud near the border with Lebanon, a Syrian military source said, a day after government troops entered the town.

Yabrud sits near key rebel supply lines stretching into Lebanon, and its fall would deal a major blow to the rebels as the war enters its fourth year.

"Fierce clashes are taking place inside the eastern neighborhoods of Yabrud," the source said, adding that "the 13 rebel chiefs leading operations are dead".

The source said there had been "very many deaths among the insurgents" in the fighting.

Syrian state television broadcast footage from a hill overlooking the town, saying "the Syrian army is progressing in the town and spreading its control over most of the areas linking Syria and Lebanon".

"The army is intensifying its strikes against the terrorist hideouts," a correspondent for the channel on the ground said, using the government's term to refer to rebels.

He reported "fierce fighting between the army and terrorist groups including Al-Nusra Front," the Syrian al-Qaida affiliate.

The Observatory said the fighting was centered on the eastern entrance to Yabrud.

"There is fierce resistance by rebels led by Al-Nusra Front, which is trying to defend the town," Observatory director Rami Abdel Rahman said.

The Observatory, which relies on a network of activists and other contacts inside Syria, said regime helicopters were dropping explosives-filled barrels on the outskirts of Yabrud.

Battle-hardened Hizbullah members from Lebanon were fighting inside the town, it said.

After a month of aerial bombing and combat around the town, Hizbullah and Syrian troops have captured all the hills overlooking it.

flamethrower; this new character is obviously a fake account spewing dirty language. You are a regular poster who never stops insulting people. Your first post in reply to @jerry was insulting. There is no excuse for your behavior!

Go back to Afghanistan, terrorist.

lol abass..... And how did hezbollah win exactly ya brain washed robot!? Did they push back the idf?? Did they scare them or made them surrender??? They begged for cease fire that's all... and suffered numerous kills they never spoke of.... well... hezbollah is not exactly known for its transparency....

lol marwan, you just discovered that? the commemoration of ashoura is a commemoration of a sacrifice for justice and dying for what is right. i might not be very fond of it myself (and hezbollah actually doesnt really approve of it, they dont take part, and keep a neutral stance towards it, not encouraging nor forbidding). but in any case, it's self inflicted and each is free to do what he wants when it only involves himself. way better than takfiris judging others and slaughtering them out of pure hatred and intolerance.