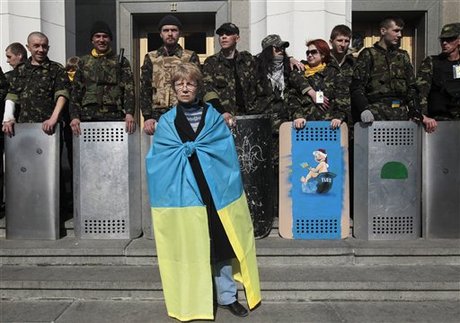 Ukraine's parliament on Tuesday approved a series of joint military exercises with NATO countries that would put U.S. troops in direct proximity to Russian forces in the annexed Crimea peninsula.

"This is a good opportunity to develop our armed forces," acting defense minister Mykhailo Koval told Verkhovna Rada lawmakers ahead of the 235-0 vote.

The decision came as NATO foreign ministers gathered in Brussels for a two-day meeting dominated by concern over the recent buildup of Russian forces near Crimea that U.S. officials estimate had at one point reached about 40,000 troops.

NATO has sought to reinforce its eastern frontier after Russia's takeover of Ukraine's Black Sea peninsula and amid concerns about Kremlin's emboldened foreign policy.

Russia on Monday reported pulling back a battalion of about 500 to 700 soldiers from the border region in a move that German Foreign Minister Frank-Walter Steinmeier called "a small sign that the situation is becoming less tense".

Ukraine is not a NATO member and its new Western-backed leaders have vowed not to push for closer relations with the Brussels-based military alliance -- a bloc that has been viewed with deep mistrust by Moscow since the Cold War.

But the ex-Soviet nation did form a "distinctive partnership" with the Alliance in 1997 and has been staging joint exercises with its state members ever since.

The exercises approved on Tuesday would see Ukraine conduct two sets of military exercises with the United States this summer -- Rapid Trident and Sea Breeze -- that have prompted disquiet in Russia in previous years.

Ukraine is planning two additional maneuvers with NATO member Poland as well as joint ground operations with Moldova and Romania.

The Sea Breeze exercises have particularly irritated Moscow because they had on occasion been staged in Crimea -- the home of Russia's Black Sea Fleet.

Those maneuvers have in more recent years been moved to the Black Sea port of Odessa where Ukraine also has a naval base.

An explanatory note accompanying the Tuesday bill says that the naval section of Sea Breeze would this time be conducted over a 25-day span between July and October out of two Odessa ports and "along the waters of the Black Sea".

The MPs met a key demand posed by both the West and Russia by voting unanimously to disarm all self-defense groups that sprang up across the country during its political crisis.

"The Ukrainian people are demanding order," acting president Oleksandr Turchynov said ahead of the 256-0 vote. "Those who carry arms -- besides the police, the security services and the national guard -- are saboteurs who are working against the country."