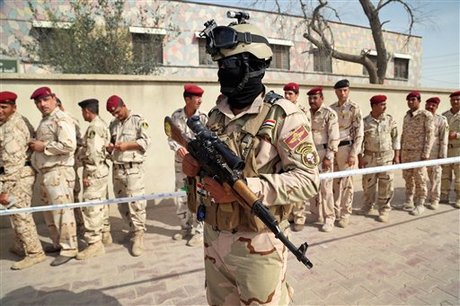 Attacks including a spate of suicide bombings killed 27 soldiers and policemen Monday as they cast their ballots in special voting ahead of Iraq's first election since U.S. troops withdrew.

The bombings in Baghdad and the north and west raise serious concerns about the security forces' ability to protect people during Wednesday's general election, when more than 20 million Iraqis are eligible to vote.

They come amid a protracted surge in violence and fears the country is edging towards all-out conflict.

At one voting center in western Baghdad where a suicide bomber killed seven policemen, ambulances ferried off the wounded as soldiers cordoned off the street and ushered passers-by away, an AFP journalist said.

Five members of the security forces were killed by another suicide bomber at a polling station in the city's north.

Attacks elsewhere killed 15 members of the security forces, officials said. Overall, more than 70 people were wounded in the bloodshed.

In the main northern city of Mosul, six Iraqi journalists were wounded as a bomb exploded while they were in a military vehicle to cover the vote.

The blasts shattered an early morning calm as soldiers and policemen queued outside polling stations amid tight security, before leaving with the traditional purple ink-stained finger indicating they had voted.

No group claimed responsibility for the bloodshed, but Sunni militant groups are typically blamed for suicide bombings and for trying to derail the political process.

Government officials did not publicly comment on the attacks.

The month-long campaign has seen Baghdad and other cities plastered with posters and decked out in bunting, as candidates have taken to the streets, staged loud rallies and challenged each other in angry debates.

"All Iraqis have a desire for change," said Jawad Kadhim, a police sergeant.

"There should be a change from the previous government which has failed in all senses of the word. The parliament did not do anything."

Along with more than 800,000 members of the security forces eligible to vote at upwards of 500 polling centers nationwide, hospital and prison staff, patients and inmates were also voting on Monday.

The election commission also said more than 60,000 ballots had so far been cast in out-of-country voting, which continued on Monday.

Attacks on candidates, election workers and political rallies have cast a shadow over the election, and parts of Iraq that have been out of government control for months will not see any ballots cast.

Authorities announced a week of public holidays to try to bolster security for the election.

The unrest is the latest in a months-long surge in violence that has claimed nearly 3,000 lives already this year, and anti-government fighters have held an entire town a short drive from Baghdad since the beginning of the year.

Although voters have a long list of grievances, in addition to the near-daily violence, the election has centered on Maliki's efforts to stay in power.

His opponents, who span the communal spectrum, accuse him of shoring up his power base, and minority Sunnis in particular say the 63-year-old Shiite Arab discriminates against them.

Maliki contends that foreign interference is behind deteriorating security and complains of being saddled with a unity government of groups that snipe at him in public and block his efforts to pass legislation.

Analysts and diplomats say that with a fractious and divided opposition and no clear replacement, Maliki remains the frontrunner in the first national election since 2010 and the first since American forces withdrew in December 2011.

Aziz Jabr, a political science professor at Baghdad's Mustansiriyah University, said the stakes were high for Maliki, warning that were he to lose his post, anger over decisions made during his eight years in power could compel his successor to seek retribution in court.

But, Jabr added, "the fissures that have emerged in the Shiite community in the past four years have not helped highlight another Shiite leader against Maliki."

No single party is likely to win an absolute majority, and as in previous elections, coalition talks are expected to take months.