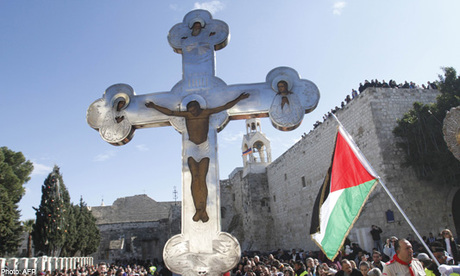 Israel on Tuesday accused the U.N. Mideast peace envoy of stoking tensions between Israel and Christians over a dispute that arose during Easter celebrations in Jerusalem.

U.N. envoy Robert Serry said he and other diplomats had joined an Easter procession at the invitation of Jerusalem's Palestinian Christian community but were denied access to the Church of the Holy Sepulcher at a police checkpoint.

A letter to U.N. secretary general Ban Ki-moon from Israel's U.N. ambassador Ron Prosor -- made public Tuesday by the Israeli foreign ministry -- said that on the day of the Holy Fire ceremony on April 19, the narrow lanes of Jerusalem's walled Old City were packed with worshipers and crowd control was a major challenge.

"Against this backdrop, and instead of taking constructive actions to help mitigate the sensitive situation, Robert Serry, the U.N.’s special envoy to the Middle East, took disruptive steps that exacerbated tensions on the ground," the letter said.

"It is unfortunate that a U.N. official abused his position and the U.N. platform to express personal opinions."

The Church of the Holy Sepulcher, one of Christianity's holiest sites, is shared by six denominations -- the Greek Orthodox, Roman Catholic, Armenian Orthodox, Egyptian Copts, Syrian Orthodox and Ethiopian Orthodox.

Serry said at the time that the group he was accompanying was stopped at a security checkpoint before the church "despite earlier assurances... of unhindered access."

"The Israeli police refused to allow such entry claiming they had orders to that effect," he said.

Meanwhile, vandals suspected of being Jewish extremists hit a mosque and a church in Israel, police said Tuesday, in the latest of a string of racist and religious attacks.

In a separate development, police arrested an Israeli man after he threatened the Roman Catholic bishop of Nazareth and demanded that Catholics leave the country or face God's wrath.

Israeli police spokesman Micky Rosenfeld told Agence France Presse vandals had scrawled "Close mosques and not yeshivas" (Jewish seminaries) on the outer wall of a mosque in the small Arab town of Fureidis, near the northern port city of Haifa.

The tires of several nearby cars had been slashed.

Police were also investigating vandalism at Tabgha church on the shores of the Sea of Galilee, which was built on the site where Christians believe Jesus performed the miracle of the loaves and fishes.

Church officials said a group of religious Jews in their early teens had damaged crosses there and attacked clergy.

Elsewhere in northern Israel, police arrested a Jewish man in his 40s for threatening Roman Catholic Bishop Giacinto-Boulos Marcuzzo of Nazareth, and members of his faith.

In the letter, the suspect said all Christians, "except Protestants and Anglicans," should leave Israel by May 5 that if Marcuzzo and his community did not comply, they would all be "killed by the heavens."

There are also other Christian communities in Israel, such as the Eastern Orthodox, Armenians and Copts.

The letter, which was signed by "the Messiah, Son of David," quoted Jewish sources who hold that Christianity is a form of idolatry and should be banned.

The suspect said the message must be distributed to the community through the media by 1700 GMT Tuesday, saying every hour of delay would "cost the lives of 100 Christian souls."

President Shimon Peres apologized to the mayor of Fureidis in the name of Israel's citizens, and said in remarks relayed by his office "we will do our utmost to find the perpetrators and bring them to justice."

"Whoever did these deeds is not part of my people," she wrote on her Facebook page, pledging to "catch and punish" those responsible.

The Assembly of Catholic Ordinaries in the Holy Land said there was "a grave and increasing frequency of what are called 'price tag' attacks, which, in the absence of any real response, are becoming a dangerous phenomenon, threatening one and all."

Denouncing the attacks in Tabgha, the letter to the bishop and the Fureidis attack, it demanded "a thorough and serious investigation of those who incite, on an almost daily basis, against those who differ from them in opinion or belief.

"We pray that the events of yesterday and today might be the last of these criminal events, witnessed by our holy places and religious symbols in this Holy Land," its statement added.

Carried out by suspected Jewish extremists, thought to be predominantly teenagers, the attacks initially targeted Palestinians and their property. They have since grown in scope to include Christian sites and anyone opposed to the settlements.