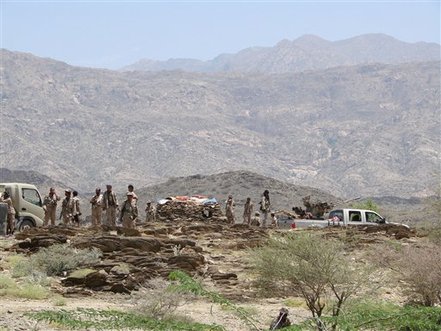 Two gunmen on a motorbike shot dead a commander of Yemen's security forces in Sanaa on Monday, a military official said, adding the attack bore the hallmarks of al-Qaida.

Military police commander Mohammed Guawza was shot four times while walking down a street in the center of the capital, the source told Agence France Presse.

The attackers managed to escape, said the official, blaming al-Qaida which has multiplied attacks against army officers and police across the country.

An AFP photographer at the scene said a crowd gathered in the street around the body of a man covered in a blanket, his red beret resting by his side.

Also in Sanaa, a bomb planted in a trash container exploded near a market, slightly wounding three passers-by, police said.

As well, a Frenchman guarding his country's embassy in the Yemeni capital was killed and another French guard was wounded when gunmen fired on their car, a security official told AFP.

Their Yemeni driver was also wounded in the attack, which took place in the capital's diplomatic district of Hada, the official said, adding that the assailants fled.

Authorities have launched an investigation into the attack, which took place a few hundred meters (yards) from the embassy, said the official, who could not immediately provide details on possible motives.

A German diplomat was wounded in the Yemeni capital on April 28 as he evaded an attempt by gunmen to kidnap him in the same district.

The attacks come on the seventh day of an army offensive aimed at clearing al-Qaida strongholds in the country's south from the jihadists.

On Sunday, the army announced that it had killed 40 al-Qaida suspects, mainly foreigners, and wounded dozens of others as part of the southern operation.

Al-Qaida in the Arabian Peninsula (AQAP) has been linked to a number of failed terror plots against the United States, and its leader Nasser al-Wuhayshi recently vowed in a video to attack Western "crusaders" wherever they are.

The jihadists took advantage of a 2011 uprising that forced veteran strongman Ali Abdullah Saleh from power to seize large swathes of southern and eastern Yemen.