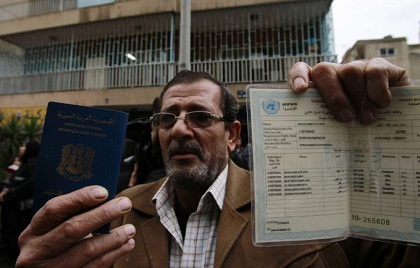 Lebanon has placed prohibitive restrictions on the entry of Palestinians fleeing Syria, making it almost impossible for them to take refuge in the small Mediterranean country.

New measures mean Palestinians fleeing Syria will not be given visas at the border, while those who are already in the country will not have their visas renewed.

In a statement posted on his Facebook page Thursday, Interior Minister Nuhad al-Mashnouq said no visas will be issued at the main Masnaa border crossing.

Palestinians living in Syria who wish to enter Lebanon must first request a visa at the Lebanese embassy in Damascus. The request will be processed by the Lebanese General Security agency.

Only those with a residence permit in Lebanon will be admitted, the minister said.

Mashnouq also announced that the two-week visas previously granted to Palestinians fleeing Syria would no longer be renewable.

Mashnouq said Palestinians from Syria have the right to a 24-hour transit visa, allowing people to travel to or from Beirut's Rafik Hariri International Airport, if they have a valid ticket and visa or residence permit in another country.

Lebanon has not signed the international refugee convention, but had generally kept its border open to people fleeing the conflict in Syria despite the scale of the influx.

Lebanon hosts more refugees from Syria than any other country, with 52,000 Palestinians among a total of more than a million. It now has the highest refugee population per capita in the world.

Human rights activists say Palestinians in Syria, who once numbered 500,000, have been targeted by both sides in the conflict, making them one of the country's most vulnerable groups.

Syria's most populous Palestinian district, Yarmuk in south Damascus, has been under blockade by the army since last year and trapped civilians have received only very limited supplies of food and medicines.

Turkey and Jordan, which also host large numbers of refugees from Syria, have barred entry to Palestinians.

Agency spokesman Chris Gunness appealed to Lebanese authorities not to block those in need of sanctuary.

"It is essential that civilians fleeing Syria and seeking safety and protection are granted access and not returned in circumstances where their lives would be at risk."

FINALLY!!! Let them go to Jordan, and Turkey, or Iraq. We have 500,000 Palestinian refugees. We can not take more.

Great news. Some sovereignty from lebanon's side. KSA should take those poor folks.

Great news. Some sovereignty from lebanon's side. KSA should take those poor folks.

Mashnouq the traitor should be hanged...
U let Hizbos go to Syria destroy their cities and villages, and then u cry when refugees come, nice logic...
Mustaqbal is a bunch of conciliatory pussies scared of a new 7 ayar...

cedre.
Do you think of the interest of Lebanon or of the palestinians? True, HA's acts are disgusting. True the fate of the pals is deplorable. But Lebanon First ya cedre. Not Pals first. dont forget that. Lebanon First.

lebanon first ? then without hizbIran in Syria, there would be 75% less syrians in Lebanon. But for that, our army and our politicians should have balls. These refugees and 2006 destruction of lebanon are direct consequences of HizbIran ruling Lebanon.
Dont want the refugees ? Treat the cause then...

Nobody wants palestinians in Lebanon, but what draws my attention is wanting them to apply for visas at the lebanese embassy in Damascus...LOL

I wonder when Hezbollah sheep will return to their Homeland, Iran !

Since Iran declared Lebanon, its south border on the mediterranean, it's clear Hezbollah does not consider Lebanon to be its country....

BAR, the magical word that we Lebanese are beginning to get to grips with. It's a real good word to use and stick to, the fact that our authorities are standing by this word, means that something good is beginning to happen to us Lebanese. Are we beginning the fruits of emancipation finally? I truly hope so, because Lebanon cannot be a dumping ground anymore for anyone and it is also said, the poor cannot afford charity, so, we have lots of very rich Arab friends, as we do have Iranian ones, and Western ones, and Russian ones. They also have vast vast lands, let them now take any refugee and even take those already in Lebanon. We are too small and we want no more. On the contrary, we want most OUT!!

**Beginning to enjoy the fruits of emancipation....**

**Beginning to enjoy the fruits of emancipation....**

PB, I wish I could buttress your views, the memory of what these people have done to our country remains too fresh in the mind, therefore as the old Lebanese saying goes, "alf 3ayn tebki wala 3ayni tedma3". The time has come for others to show the good heart we showed for so long.

This reminds me how HA uses them as an excuse to further their "cause", yet contributes to Assad's indiscriminate killing of them and barring of their very camp, stupid religious nonsense yet again, in the rest of the world we've advanced more each day, proud of yourselves? Keep it up it'll show how "superior" you are.

Love how he leaves that little tidbit of info out Peace :P. Stop using the Palestinians to justify your acts...Taqiya yet again.