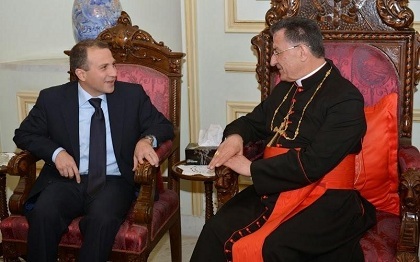 Maronite Patriarch Beshara al-Rahi informed Foreign Minister Jebran Bassil that the election of a president by May 25 would be guaranteed by the attendance of all lawmakers to the parliamentary session.

Al-Rahi and Bassil discussed the presidential elections during talks at the seat of the Maronite church on Friday, Bkirki spokesman Walid Ghayyad told al-Joumhouria daily.

The patriarch stressed to him that the election of a head of state before the expiry of Michel Suleiman's term on May 25 requires that all MPs attend the election session, Ghayyad said in his remarks published on Saturday.

Bassil is a Free Patriotic Movement official and the son-in-law of FPM chief Michel Aoun.

The members of Aoun's Change and Reform bloc along with Hizbullah and the rest of the March 8 parties, except for Speaker Nabih Berri's lawmakers, are boycotting the parliamentary sessions causing a lack of the needed two-thirds quorum of the 128-member legislature.

Ghayyad hinted that the deadlock on the presidency was being steadily resolved. But he did not set a timetable on a settlement on the election of a head of state.

Bishop Samir Mazloum also said in remarks published on Saturday that Bkirki was exerting all efforts to hold the elections on time.

But he stressed that the seat of the Maronite church cannot oblige the lawmakers to attend the parliamentary sessions.

And in the afternoon, the Maronite Patriarch discussed the presidential polls with Telecommunications Minister Boutors Harb.

Harb considered that “the stances of those obstructing quorum in the presidency and preventing the election of a new president based on the constitutional requirements cannot be justified.”

"This is an attack against the democratic system,” he stated. “MPs are using their absence from parliamentary session as a weapon used for purposes that do not serve Lebanon's interests.”

"Obstructing the vote subjects Lebanon to great dangers, and it harms the country's unity, as well as its national, political, and sectarian balance,” Harb said, reiterating his rejection of vacuum in the presidency.

The Telecom Minister assured that al-Rahi will keep on contacting different leaders in the country and pressure them to hold the vote within the constitutional timeframe.

seems march 8 is afraid of next voting round for geagea. have they listened to private phone calls that seems to have agreed to vote in geagea's favor?

Aoun promised Rahi he would not boycott the elections. This makes him a liar on top of being a traitor !

Patriarch may not be able to oblige lawmakers to perform their duty, but he can put them out of the Maronite Church and if they are not Maronites, then they cannot become Presidents either.