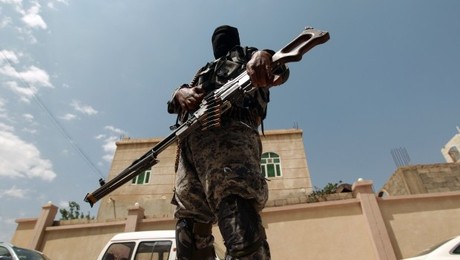 A shell smashed into a vehicle and killed five civilians on Thursday during clashes between Yemen's army and Al-Qaida suspects in the country's restive south, witnesses said.

The incident occurred near Al-Saeed, an Al-Qaida stronghold in Shabwa province, destroying the vehicle and killing all five people on board, the same sources said.

They identified the victims as members of the powerful Shabwa-based Awaliq tribe, from which U.S.-born Al-Qaida cleric Anwar al-Awlaqi, killed in a U.S. air strike in September 2011, hails.

One witness said the "echo of the sound made by the shelling came from an army position", as another spoke of a "mistake" by troops.

A tribal source also said "the army is responsible for firing at the car".

But a military official denied the accusations, and blamed Al-Qaida.

"Al-Qaida elements wanted to attack an army vehicle but their shells hit a civilian car," he told AFP.

"Al-Qaida and its allies are blaming the armed forces in order to impede the offensive" launched by the army on April 29 against jihadist strongholds in Shabwa and neighboring Abyan.

The jihadists' Yemen franchise, Al-Qaida in the Arabian Peninsula, took advantage of a 2011 uprising that forced veteran president Ali Abdullah Saleh from power to seize large swathes of the south and east.

The army recaptured several major towns in 2012 but has struggled to reassert control in rural areas despite recruiting militia allies among the local tribes.