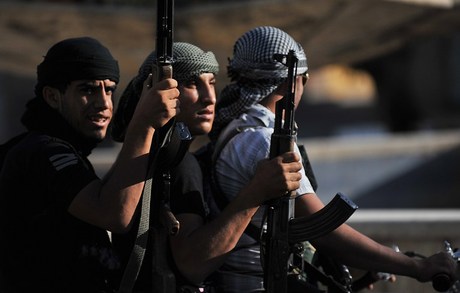 The White House did not confirm or deny the plan, but said it was "constantly considering available options to combat the terrorist threat emanating from Syria and to facilitate an end to the crisis."

"The current policy approach continues to be strengthening the moderate opposition, which offers an alternative to the brutal Assad regime and the more extremist elements within the opposition," spokeswoman Jen Psaki told reporters.

Officially, U.S. support for Syrian rebels has been limited to non-lethal aid amounting to $287 million, though the CIA reportedly participates in a secret program to train moderate rebels in Jordan.

Obama may announce the new U.S. position during a speech Wednesday at the West Point military academy.

"The president will make clear his intention to expand our support to the moderate Syrian operation and increase our support to Syria's neighbors, who are dealing with the terrorist threats emanating from the situation Assad has created in Syria," a senior administration official told the Wall Street Journal.

The president will not give details on how many rebels would be trained nor where their training would take place, the report said.

This position is the culmination of a year of discussions within Washington, which is torn between a desire to pressure the Syrian regime and the fear of being drawn into a new Mideast conflict.

But the rise of extremist rebel groups linked to al-Qaida, and the pressure exerted by U.S. allies in the region, in particular Saudi Arabia, have forced the decision, the Wall Street Journal reported.

In recent weeks, Syrian rebels have reported receiving U.S.-made TOW anti-tank missiles, without making clear whether the missiles were sent by Washington or by Saudi Arabia with U.S. approval.

The "more than 20" missiles were provided to the Hazm movement, part of the opposition Free Syrian Army, which brings together mainly ex-army officers and soldiers who defected from the military to join the revolt, a rebel source told AFP.

"More have been promised should it be proven that the missiles are being used in an effective way," the source said.