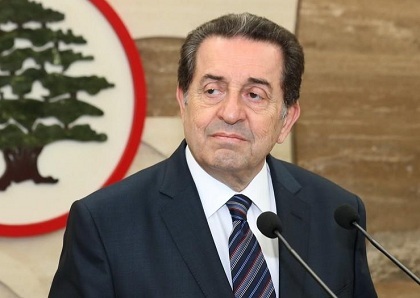 Telecommunications Minister Butros Harb stated on Saturday that it is “unacceptable” that watching the 2014 FIFA World Cup be limited to people who can afford it.

He said via Twitter: “Contacts are underway with SAMA, the sole agent responsible for broadcasting the tournament, in order to reach a solution to the Lebanese people.”

“We hope to make a pleasant announcement in the upcoming hours,” he added.

“It is unacceptable that the tournament be inaccessible to people of limited means, which is a sign of class discrimination that is no longer tolerable,” said Harb.

“Such incidents violate the simplest rules of justice and equality between the people,” he stressed.

Meanwhile, Director of the sole agent company SAMA, Hassan al-Zein, told Voice of Lebanon radio (93.3): “We are open to any solution on condition that the company does not incur any more losses.”

He revealed that the company has run out of receiver cards that grant access to the tournament games, saying that it takes 12 to 15 days for new cards to arrive to Lebanon from Europe.

Television cable providers in Lebanon criticized on Friday the state for failing to address the issue of broadcasting the 2014 FIFA World Cup.

What's the problem?
The Telecommunications Minister orders the television companies to broadcast the World Cup free of charge or...........guess whose license to broadcast will be immediately cancelled.
That whole process should take anything up to a minute to carry out, and problem solved.

focus on water and electricity, that will be a good begining...

The communications minister will focus on water and electricity?

internet, phone network not available in some areas in the capital, anything more important than WC...

set up a parliamentary commission like you are used to and procrastinate... isn't that what they always do? or here by miracle they ll find a quick answer? LOL

What the hell is this all about. The World Cup is a money generating business. Bein sports paid a huge chunk of money to FIFA to have the broadcasting rights. Why should they give it up for free? Either the government pays them a national fee and decides to air it (which is NOT compulsory as it is not mentioned in any law that Lebanese citizens are entitled to watch the World Cup for free) or whoever wants to watch it suck it up and pay the subscription fee. That's the problem with Lebanese. They think they are entitled to things nobody else in the world is. Bottom line. Someone's gotta pay.

As I said then let the govt foot the bill. But bein should not be the one that provides it for free.

Hey man if you think you have it bad come to the US. We pay almost 35% of our income and get diddly squat out of it. Sorry it's not upto the government to fork the bill, however I do believe that bein is monopolizing in A BAD way the game and no it's not a business FIFA is a non-profit organization. Most of the players don't get paid for their participation.

It is up to the company that bought the broadcasting rights. They are not forced to generate revenue in one way or the other. They can do as they please.

Southern
I totally agree with you. In the USA we watch super bowl for free and in return publicity covers more than the costs involved. I wish the Lebanese companies sponsor such event instead of supporting stupid lame shows on national tv's

Actually there is a major problem commercializing soccer compared to football. Football is stopped on many occasions enough to run 4-5 commercials, heck in the game there is something called commercial breaks! You can't do that in soccer it's a 45 minute non-stop action and than everybody takes a break and won't really watch the tv. So the commercial interest in soccer isn't great.

terrorist
FIFA is a business entity it provides shows that the demand is so strong it can generate money
so why not?

Because FIFA is not a for profit company! FIFA is a non-profit organization!!!!

I do not understand; nobody is blaming the Zionist Entity??!?

We are too busy blaming you for all the children you have killed.

@Southern : what do you mean "in Lebanon, there is no publicity or commercial campaign". On Al-Manar, maybe ... but have a look at other channels and discover the world of commercials !

Aslan Da7ye like cable guyes can bring it, cheap as southern..!

Southern,
All matches are not shown publicly in Europe.
Each government decides a specific quota of openly aired games. The rest of the games are given in Lots, or packages, by public bidding with FIFA, to each company that can do with them as they please.
TF1 is indeed a private network, but which airs on the TNT, the equivalent of american national TV.
So saying TF1 is a private network, buys the games, then does as they please is not completely true. TF1 can decide tomorrow that they will start charging per game watched, but i'd expect a popular uprising more violent than any arab spring in the following minutes.