Karzai Says Afghanistan will not be a Repeat of Iraq 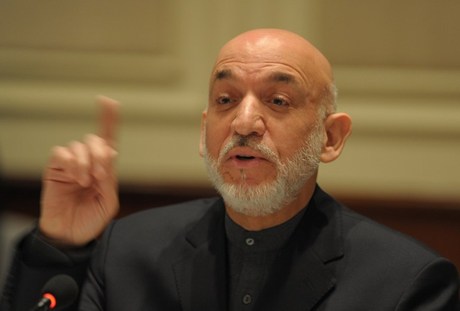 Afghan President Hamid Karzai has dismissed suggestions that his country could descend into the same chaos as Iraq when U.S.-led troops pull out and leave the national police and army to impose security.

Both countries have been at the center of U.S. wars, and are plagued by insurgencies fighting against local security forces trained by the American military.

The seizure of several major cities by jihadist rebels has taken the Iraqi government by surprise and alarmed the international community, leading to fears that Afghanistan could one day face the same fate.

"Never, not all," Karzai told the BBC when asked whether what was happening in Iraq could happen in Afghanistan.

In an interview released on Wednesday, he said the al-Qaida militant group no longer had a presence in Afghanistan.

Karzai will soon step down, ending his rule, which began in 2001 when a U.S.-led invasion ousted the Taliban regime for sheltering al-Qaida leaders behind the 9/11 attacks on New York and Washington.

The NATO combat mission in Afghanistan will end in December after 13 years of fighting the Taliban insurgency.

The next president will be under pressure to open talks to bring peace, and Karzai said he was in daily communication with the Taliban.

"There is even an exchange of letters, meetings, and desire for peace," he said.

Both candidates to succeed Karzai have vowed to sign an agreement to keep some U.S. troops in the country after this year -- in contrast to a similar deal that broke down in Iraq, leading to a complete U.S. troop withdrawal.

But Washington recently said only 10,000 U.S. troop would remain next year and all would be pulled out by the end of 2016.