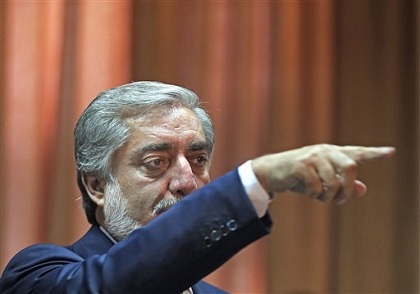 Afghan presidential election candidate Abdullah Abdullah on Wednesday demanded a halt to vote-counting over fraud allegations, taking the country to the brink of a political crisis during its first democratic transfer of power.

Abdullah ramped up his complaints over alleged fraud in Saturday's run-off election by accusing his opponent Ashraf Ghani, outgoing President Hamid Karzai and the Independent Election Commission (IEC) of all being involved.

But Abdullah's statement on Wednesday fuelled a growing dispute that could trigger instability as U.S.-led foreign combat troops withdraw by the end of the year.

"We suspend engagement with the (election) commission and we have asked our monitors to leave their offices," Abdullah said.

"We are asking for the counting process to be stopped immediately."

He added that "everybody knows... that unfortunately the president of Afghanistan was not impartial" and that some ballot boxes were stuffed with votes the day before the second-round election.

The arguments erupted despite pleas from the United Nations and the United States for Abdullah and Ghani to give officials time to conduct the count and adjudicate on fraud complaints.

"We regret this step, and at the same time we will keep working with both campaigns and the election commission."

Abdullah, a former resistance fighter and foreign minister, believes fraud denied him victory in the 2009 presidential race, and has often said that only ballot-rigging could stop him from winning this time.

Counting the votes is due to take weeks, pitching Afghanistan into a period of uncertainty as the NATO combat mission ends this year and the aid-dependent economy falters.

The preliminary result is set to be announced on July 2, before the official complaints period begins, and the final result is scheduled for July 22.

The U.N. said it "needed to learn more" after Abdullah raised the idea of it playing a role in breaking the impasse.

Karzai and Ghani made no immediate response to Abdullah's latest allegations, while the IEC said the vote count continued but offered no further comment.

Ghani's campaign team has been defending their candidate on Twitter since Abdullah first made fraud claims late Sunday.

"We reject and condemn any vote of fraud," Ghani's camp said on Tuesday. "We let the respected Election Complaints Commission investigate and pursue all the complaints."

The two candidates went through to the run-off vote after coming first and second in the eight-man election on April 5, when Abdullah secured an easy win with 45 percent against Ghani's 31.6 percent.

Saturday's run-off was hailed a success by Afghan officials and international donor nations, despite the death of more than 50 people in various Taliban strikes on polling day.

The IEC quickly announced that the estimated turnout was more than seven million voters -- above 50 percent and in line with the first round -- but the figure was greeted with some skepticism.

"The exaggerated turnout... was not convincing for us," Abdullah told reporters.

He said that in some volatile provinces, voter numbers were "not in proportion to the population of that area, let alone the security situation".

If the dispute deepens, ethnic friction is a concern. Abdullah's support is based among the Tajik minority and other northern tribes, while Ghani is a Pashtun -- Afghanistan's largest ethnic group, which is strongest in the Taliban heartlands of the south and east.

After the poll closed, the White House praised voters' courage and called the elections "a significant step forward on Afghanistan's democratic path".

Eleven voters in the western province of Herat had their fingers -- which were dipped in ink to register their ballot -- cut off by insurgents.

All NATO combat forces are due to withdraw from the country by December, though 10,000 U.S. troops will remain into next year.

Karzai, who has ruled since the fall of the Taliban in 2001, was constitutionally barred from standing for a third term.