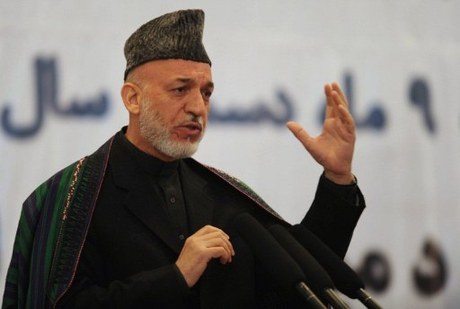 Afghan President Hamid Karzai on Friday intervened for the first time in the country's growing election crisis, backing a call for the United Nations to help solve a standoff over alleged fraud.

Abdullah Abdullah, previously seen as the front-runner to succeed Karzai, has asked the U.N. to step in and has vowed to reject the result due out next month because of "blatant" fraud committed in the vote a week ago.

The dispute has thrown the country's first democratic transfer of power into turmoil to the dismay of international backers looking for a concrete sign of progress after 13 years of costly military and civilian assistance.

The proposed rallies raised fears of clashes with security forces at a sensitive time for Afghanistan as NATO combat troops withdraw.

"I not only accept this proposal (for U.N. mediation), but I see it as positive step to ending these problems," Karzai said in a statement.

"The disputes and doubts arising during the election process are a natural thing," he added.

"It is fine and calm in the country."

The U.N. responded rapidly, saying it noted comments about a potential U.N. role.

"We stand ready to help facilitate an Afghan-led process... but we will need to hear more details about any proposal," a spokesman told Agence France Presse.

The 2009 election, when Karzai retained power, was mired in massive fraud, shaking the U.S.-led international effort to develop Afghanistan after the Islamist rule of the Taliban.

Abdullah pulled out of that election before a run-off vote against Karzai, saying that systematic fraud made it impossible for him to win -- but he has repeatedly said he will not step aside again.

Abdullah alleged that the turnout figure of seven million in the run-off was exaggerated and that in several provinces there were more votes than eligible voters.

He accused Ghani, the election authorities and Karzai of all being involved in fraud against him.

A smooth election was seen as a key benchmark for the U.S.-led coalition that has fought against Taliban insurgents and donated billions of dollars in aid since 2001.

But NATO military operations are winding down fast, and the dispute could wreck claims that a functioning state has been set up in place of the ousted Taliban regime which sheltered Osama bin Laden.

The election dispute also risks spilling into ethnic violence -- a grim prospect for Afghanistan where tribal loyalties are still fierce after the 1992-1996 civil war.

Both Abdullah, a former anti-Taliban resistance fighter, and Ghani, an ex-World Bank executive, have pledged to foster national unity.

The run-off vote was held after the two came first and second in an eight-man election on April 5, when Abdullah was far ahead with 45 percent against Ghani's 31.6 percent.

Karzai had previously stayed out of the election process -- in public at least -- and he has not endorsed any candidate to take over when he steps down after serving the maximum two terms in office.

As well as backing U.N. mediation, Karzai on Friday said negotiations between the poll rivals could be overseen by the two vice-presidents.

In the latest violence, a Taliban attack killed three NATO soldiers and a military dog in the southern province of Helmand on Friday.

It is entirely normal in a NATO-governed country for the ethnic minority to achieve success in electoral politics at the expense of the majority. This is what is meant by "stability".