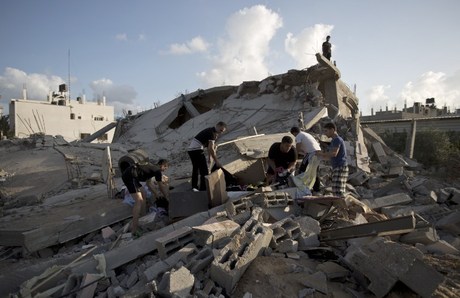 The death toll from Israel's week-long campaign in Gaza rose Tuesday to 194, as two Palestinians were killed in renewed strikes after an Egyptian truce bid failed.

An Israeli was also killed on Tuesday, the first since the eruption of the war.

"This would have been better resolved diplomatically, that’s what we tried to do when we accepted the Egyptian truce proposal today," he said.

"But Hamas leaves us no choice but to expand and intensify the campaign against it," Netanyahu said.

"That’s how we will act till we achieve our goal of bringing quiet to Israel’s citizens, while significantly harming the terror group," he said of the Palestinian Islamist movement Hamas which controls Gaza.

In televised remarks, Netanyahu also addressed criticism from members of his cabinet earlier in the day, when Foreign Minister Avidgor Lieberman slammed the Israeli acceptance of the Egyptian truce and Netanyahu's "hesitance," saying Israel should conquer Gaza and expel Hamas from it.

"These are moments when decisions must be made coolly and with patience, not hastily or noisily," Netanyahu said.

"I’m determined to do the right thing, I know you trust me to ignore the background noises and focus on the main mission to safeguard you and your lives."

Shortly after Netanyahu's remarks, his bureau announced he had fired deputy defense minister Danny Danon, a firebrand member of his Likud party, who became a vocal critic of Netanyahu during the operation, calling him a "failure" and saying Hamas was controlling the conflict.

"It is inconceivable that the deputy defense minister will attack the country's leadership leading the campaign," a statement read.

"The severe remarks show a lack of responsibility... and even are used by Hamas terror group to slam the government, as evident in their communication networks," it said.

Meanwhile, speculation remained rife over a possible ground incursion, with no conclusive remarks from Israeli officials but a pledge to carry one out if the need arose.

"The army renewed its attacks and will increase them as much as necessary, in the air, sea and land, according to our orders," the armed forces chief of staff, Lieutenant General Benny Gantz, said after Netanyahu's remarks.

Earlier, a 77-year-old man was killed in the southern city of Khan Yunis.

They were the first people to be killed since Israel renewed its air strikes after observing for six hours a ceasefire that Hamas snubbed.

The Egyptian-proposed ceasefire went into effect at 0600 GMT, but Hamas said it had not been consulted on the truce and would not halt fire without a full-fledged agreement involving Israeli concessions.

Before the 0600 GMT deadline, three people were killed in two separate air strikes on Khan Yunis, and two other men in the city succumbed to injuries sustained in earlier raids, Qudra said.

Also in the south, a woman was killed in an earlier strike on Rafah.

Late Monday, the death toll rose above that of the previous major conflict between Israel and Hamas militants, an eight day confrontation in November 2012 which claimed the lives of 177 Palestinians and six Israelis.

The Gaza-based Palestinian Center for Human Rights said on Sunday, when the toll stood at over 150, that three quarters of the dead were civilians.

And on Monday, a senior U.N. official said more than a quarter were children.

The bloodiest day so far was Saturday when 56 Gazans were killed.

Since then, 922 rockets have hit Israel, while another 207 have been intercepted by its Iron Dome air defense system, the army said.

And on Tuesday afternoon, a rocket fired from Gaza killed an Israeli civilian, the army said, the first Israeli death in eight days of cross-border violence.

The man was fatally wounded near the Erez crossing into Gaza, the army said.

A spokesman for the Israeli emergency services told Agence France Presse the 38-year-old was delivering food to soldiers serving in the area.

"The Qassam Brigades fired five mortar rounds at military forces at the Erez base," it said.

"The enemy acknowledges the death of a Zionist soldier and the injury of another in the Qassam shelling of the Erez base."

Earlier in the day, Israel accepted an Egyptian proposal to hold fire Tuesday after a week-long campaign in Gaza, but warned Hamas it would hit back even harder if the rocket fire does not stop.

In an early-morning vote, Israel's security cabinet said it would accept an Egyptian ceasefire which went into force at 0600 GMT, despite Hamas rejecting the initiative.

But the calm was short-lived, with sirens sending tens of thousands running for cover along Israel's Mediterranean coast as militants fired rockets at the densely-populated plain.

The army said one was even fired at the port city of Haifa, 165 kilometers (102 miles) to the north, although there was no confirmation of anything landing there.

The truce proposal, which Cairo laid out late Monday, won U.S. support as the death toll in Gaza soared to 192 after a week of intensive bombardment by the Israeli air force.

But the Islamist Hamas movement, whose militants have fired more than 1,000 rockets, ruled out any end to the fighting without a full agreement.

And tensions rose along Israel's other frontiers, with three rockets hitting in and around the southern resort city of Eilat overnight after another fired from Lebanon struck just outside the northern coastal town of Nahariya, the army said.

A rocket fired from the Syrian Golan also struck the Israeli-occupied sector, prompting the air force to launch a pre-dawn strike, killing four, said the Syrian Observatory for Human Rights.

As the violence resumed, with 35 rockets striking Israel since the 0600 GMT deadline, Netanyahu warned Hamas the Jewish state would not hesitate resume its punishing campaign in and around Gaza.

"We responded positively to the Egyptian proposal to give a chance to deal with the de-militarization of Gaza," Netanyahu said, referring to Hamas's arsenal of missiles and rockets.

"But if Hamas doesn't accept the ceasefire proposal -- and that's how it seems at this point in time -- Israel will have all the international legitimacy to broaden its military activity in order to achieve the necessary quiet."

Cairo's initiative was made after Washington warned Israel against a launching a ground offensive in Gaza, where troops and military hardware have massed along the border.

"We are encouraged that Egypt has made a proposal to accomplish this goal that we hope can restore the calm that we are seeking," said U.S. President Barack Obama, as Secretary of State John Kerry warned of the "great risks" of any new escalation.

And Israeli President Shimon Peres said a ceasefire must mean an end to rocket fire on Israel.

"We all wish to lower the flames, we want an end to the fighting and we hope to see it soon. But there can be no compromise with terror. A ceasefire must be on these terms: No more rockets. No more terror."

But Turkish Prime Minister Recep Tayyip Erdogan put the blame entirely on Israel accusing it of carrying out "state terrorism" and a "massacre" of Palestinians in Gaza.

Israel's security cabinet approved the Egyptian proposal by six votes to two, ordering the military to halt its fire.

"Israel's leadership has directed our forces to suspend strikes in Gaza," the army tweeted. "If Hamas fires at Israel, we will respond with force."

On the ground, Gaza's streets were a little fuller than in previous days, with people taking advantage of the unilateral ceasefire to escape their homes and stock up on provisions.

Despite the renewed rocket fire, there were no immediate reports from Gaza of the military hitting back.

Overnight, a Hamas official said there would be no truce without a fully-fledged deal on the table, and hours later, the movement said it had not been consulted.

"Because we were excluded from the consultations for this (truce) initiative, we are not obliged to abide by it," a statement said.

However, a top Hamas official said the movement had not yet formulated a position on the proposal.

"We're still in consultations. The movement has yet to take an official position on the initiative," Mussa Abu Marzuk, Hamas's overseas deputy based in Cairo, wrote on Facebook.

They refuse the truce, then they will complain...

Hamas was not consulted on the text or the content of the truce. Israel was. Hamas is told "Take it or leave it." kanaanljdid - do you know what this stipulates?

Asaf ... Show me a text of the ceasefire text. If you cannot, please spare us.

Well, people are dying, nothing was asked from Hamas but only to stop shooting, as it was requested from Israel who accepted although it has the upper hand.

A truce is a truce, and only then you can discuss political issues. But they prefer their silly arrogant attitude than preserving Gaza citizens, it's a shame.

A truce is not a truce where Israel violates the truce on a regular basis (over a hundred times since the last truce till before the latest outbreak), decides when its starts a war, keep Gaza locked in an inhumane siege. Israel must lift its siege of Gaza and must actually respect the previous agreements in the first place. And to those Lebanese that gave the israeli asaf and kanaanljdid thumbs up, shame on you all.

Asaf - you are either an ignorant or a dishonest person. Show me where Hamas plans to "annihilate all the Jews in the world."!!!!!! Hamas leaders have made it clear that they are willing to accept peace based on a Palestinian state in the west bank and gaza and a just settlement of the Palestinian refugees. This is indeed the position that is supported by international law. Israel refuses because it is an outlaw state.

Abbas supports the truce -- he is the leader of the united Pal government. Either Abbas or the PM would be the right person to have negotiated on behalf of Gaza. Is that not correct?

Asaf - where did your parent or grand-parents born? Why do you have more rights to be in Israel than 75% of the Gazan Palestinian population that were driven out! Did you investigate to see if you live on land stolen from the same refugees you are defaming? Or for you, it really does not matter at all!

So you consider the one who murders the most civilians the victor then? Good to know

Best for both sides to agree to a ceasefire.

Bravo warmonger Iran. When are the Arabs are going to wake up and deflect extremism collectively from both sides of the isle instead of fostering false beliefs.