U.S. to Release Intelligence on Downing of MH17 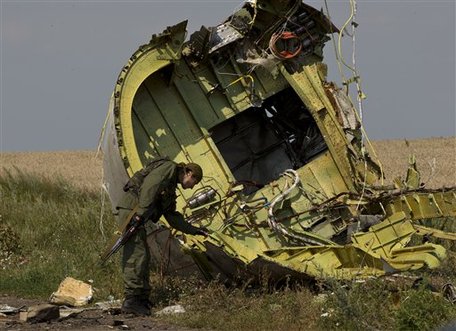 U.S. intelligence officials were expected to present data Tuesday backing up the theory that pro-Russian rebels were responsible for the downing of flight MH17 over eastern Ukraine.

The Malaysia Airlines Boeing 777 was blown out of the sky Thursday by what is believed to have been a surface-to-air missile, killing all 298 passengers and crew on board.

"There has been a lot of evidence that's already been presented that paints a pretty compelling picture," White House spokesman Josh Earnest said.

Earnest did not go into more detail about what was to be released.

The United States has alleged that the plane was shot down by an SA-11 surface-to-air missile system from an area in eastern Ukraine controlled by the Moscow-backed separatists.

"The Ukrainian military was not operating anti-aircraft weapons in that area at that time," Earnest reiterated.

On Monday, Obama voiced outrage that the probe into the downing of the airliner was being hampered by Ukrainian rebels and demanded that Russian leader Vladimir Putin force them to cooperate, saying Moscow had "direct influence over these separatists."

Putin, who has borne the brunt of international fury, pledged Tuesday to "do everything" to influence the separatists and ensure a full probe into the crash.

Moscow had earlier slapped down accusations that it had supplied the alleged missile system, with a senior defense official intimating that Kiev may have been responsible for its downing.