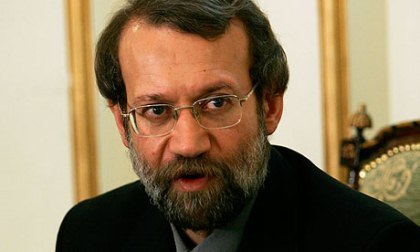 Iran provided Palestinian Islamist movement Hamas with the technology it has used to rain down rockets on Israel from Gaza, its parliament speaker said on Thursday.

Tehran frequently boasts of the financial and material support it gives to Palestinian militant groups Hamas and Islamic Jihad but more rarely talks of its military assistance.

"Today, the fighters in Gaza have good capabilities and can meet their own needs for weapons," speaker Ali Larijani told the Arabic service of state television.

"But once upon a time, they needed the arms manufacture know-how and we gave it to them," he said.

During the last major conflict in and around Gaza in November 2012, Larijani said Iran was "proud" to have provided "both financial and military support" to Hamas.

Israel accused Iran of supplying Gaza militants with its Fajr-5 missile, which has a range of 75 kilometers (45 miles), for use during that conflict.

But the commander of Iran's Revolutionary Guards, General Mohammad Ali Jafari, said at the time that it was not the missiles that had been supplied but their technology.

Iran's supreme leader Ayatollah Ali Khamenei called on the Palestinians on Wednesday to keep fighting Israel and to expand their resistance from Gaza to the occupied West Bank.

What a wonderful gift! Instead of education, medicine, skills.....you gave them weapons of war. They should kiss your feet for such a kind demonstration of love. Now, will you help them rebuild their infrastructure since your generous gift led to the destruction of any semblance of a functioning economy. And, you let them spill blood for your half-baked hatred of Jews while you sit in your luxurious homes a thousand miles away. Such kind friends you are.

Why people follow fools that live in the Middle Ages I will never know. Israel is a permanent fixture in the Middle East. Accept it. Live with it. Negotiate around it. But assuming you will defeat it guarantees nothing but decades of death.

It's not just Iran... in fact, the smarter the powers the more they play this game. Afterall, who really wants to get their hands all dirty.

The saddest thing however is the fabricated conflict between the different religious groups. There's a whole bunch of sectarian guys over here (half of them I suspect are faking it), but I doubt they represent the average Lebanese. In reality, we've been there and done that and we know where it leads and we're not going there again.

The best thing for us is to focus on building a nation for every Lebanese, bypassing our crony politicians and outdated sectarian antics.