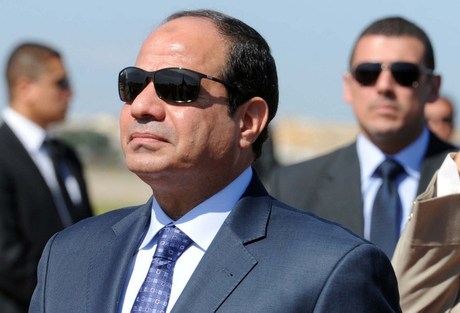 A Palestinian delegation is expected in Cairo on Saturday to discuss a durable truce to end the fighting, a day after a temporary ceasefire collapsed with Israel and Hamas blaming each other.

"The Egyptian proposal is the real chance to find a solution to the crisis in Gaza and to end the bloodshed," Sisi told a joint news conference with visiting Italian Prime Minister Matteo Renzi.

"Time is decisive, we have to take advantage of it quickly to douse the fire in the (Gaza) Strip... and to stop the bloodshed of Palestinians."

When the latest Gaza war erupted last month, Egypt -- the traditional broker in such conflicts -- cobbled together a ceasefire proposal, quickly backed by Israel, Arab governments, the United States and the United Nations, but brushed off by Hamas.

Hamas accused Egypt of coordinating with Israel and bypassing the Palestinian movement when offering the ceasefire proposal.

The Brotherhood has faced a brutal police crackdown since Morsi's overthrow.

On Saturday, Sisi insisted that the Egyptian proposal could be the basis to launch negotiations between Israel and Hamas.

"It is the third time that there is Palestinian bloodshed," he said, referring to earlier conflicts in 2008 and 2012.

"We should take advantage of the difficult circumstances... and we have a real chance to put an end to the current crisis and build on it a comprehensive solution to the Palestinian cause."

Renzi gave his backing to the Egyptian initiative and called for the release of an Israeli soldier said to have been captured by Hamas.

"I join my voice to the voices of European ministers in calling for the release of the captured Israeli soldier," Renzi said.

Hamas's armed wing has denied any knowledge about the fate of the missing Israeli.

A joint Palestinian delegation, including Hamas and Islamic Jihad representatives, is arriving in Cairo later Saturday for talks for a longer-term truce in Gaza.

A proposed three-day truce that began at 0500 GMT Friday collapsed amid a deadly new wave of bloodshed and the apparent capture of the Israeli soldier.

An Egyptian foreign ministry official, meanwhile, said Cairo has so far sent more than 1,000 tonnes of medical and food aid to Gaza through the Rafah crossing which has been opened for "humanitarian" reasons.

The official also said Egypt has received wounded Palestinians who are being treated in local hospitals.

This scumbag what get greased anywhere else in world by the other criminals. Egypt, What a decrepit and useless pimple, Egypt and the little SISI .