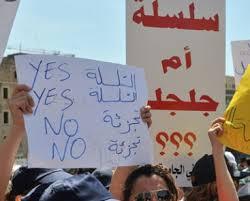 The Syndicate Coordination Committee on Monday announced canceling a general strike that was scheduled to take place on Wednesday at all public institution, citing the security situation in the country as a cause.

"Considering the security situation, the SCC announces postponing the general strike at public institutions and ministries of Wednesday, August 6, and the rally at the Ministry of Education,” a SCC spokesperson said at a press conference.

The Committee hailed the army, its soldiers and officers and offered condolences over the death of many army personnel in the ongoing battles against jihadists in the eastern border town of Arsal.

"We call for solidarity with the army and for denouncing all factional differences,” he urged.

The army has been battling a group of Syrian jihadists in the Bekaa region of Arsal since Saturday. Fourteen soldiers have been killed and 86 others wounded since the eruption of the clashes, while 22 troops have gone missing, according to an army statement. At least three civilians have also been killed by the gunmen.

"The Education Minister's attempt to grant students who passed school exams temporary certificates that would allow them to register at universities is a non-academic procedure,” the SCC spokesperson said.

“He is held responsible for all negative consequences that might result from such a step,” the SCC added.

Accordingly, it assured that the “only solution for correcting exams” lies in the adoption of the contentious new wage scale.

Bou Saab pledged last week not to oblige teachers to correct exams, stressing also that no correction would take place without SCC consent.