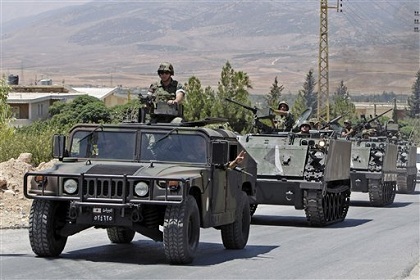 A soldier died Saturday of wounds sustained in clashes with jihadists in the northeastern town of Arsal near the Syrian border and the body of another was found in al-Hosn area, raising the number of troops killed in the fighting to 19, as media reports said Islamists have demanded the release of Roumieh inmates in exchange for army hostages.

"Soldier Abdul Hamid Nouh on Saturday morning succumbed to wounds he sustained during clashes with terrorist groups in Arsal,” the Army Command announced in a communique.

And on Saturday evening, the state-run National News Agency reported that the body of an army soldier was found in Arsal's al-Hosn area.

It noted that the martyred troop was killed on the first day of the Bekaa clashes.

The fighting between troops and extremist fighters broke out on August 2 when jihadists from Syria attacked army and police posts in Arsal after the arrest of a militant accused of belonging to the al-Qaida affiliate Al-Nusra Front.

During the fighting, 19 soldiers and 17 policemen were seized by the militants and are still being held hostage.

Meanwhile, An Nahar daily reported earlier on Saturday that the Islamists who took part in the Arsal clashes have demanded the release of a number of their colleagues in the Roumieh Prison in exchange for the release of the kidnapped troops.

The newspaper said that the Islamists called for the release of some 20 extremists imprisoned in Roumieh.

“It's very simple, they will get their soldiers in exchange for the Islamist hostages,” one Islamist was quoted as saying.

This demand has been submitted to the Lebanese government and army, he revealed.

A government source however said that the cabinet did not receive any demand from the Islamists, added the daily.

A delegation of the Muslim Scholars Committee had been tasked with negotiating with the Islamists a ceasefire in Arsal, which was reached on Thursday.

Sheikh Samih Ezzeddine told As Safir that the kidnapped troops are doing well, adding that they have not been tortured or harmed.

They were taken outside of Arsal on the second day of the clashes, he continued.

Another member of the Committee, Husam al-Ghali told As Safir that logistic challenges and the shelling of the outskirts of Arsal prevented the delegation from communicating with the Islamists regarding the release of the hostages.

He said that a delegation from the Committee will head to Arsal later on Saturday in order to receive a response over an army demand that the captives be released.

There is a high possibility that they may be released in phases over a few days, he added.

He also speculated that the captives may be held in the outskirts of Arsal or in Syria's al-Qalamoun region.

The fate of at least 35 soldiers and policemen, who were held captive by Islamist gunmen in Arsal, remains unknown after contacts were lost with them.

According to As Safir newspaper on Friday, armed men who retreated to Syria from Arsal after intensified clashes with the Lebanese army have taken hostage more than 35 soldiers and policemen in an attempt to exchange them for Islamist prisoners, held at Roumieh prison's Bloc B.

On Thursday, a delegation from the Muslim Scholars Committee tasked with mediating with the gunmen announced that it has lost contact with militants who have taken army and Internal Security Forces personnel captive.

But al-Nusra Front announced later that the soldiers and policemen who are still in captivity have a "special status that will be revealed later."

Security forces and the army have recently taken strong measures around the country's largest prison after reports emerged of an armed takfiri group planning to abduct civilians to swap them with Roumieh Prison inmates and another alleged plot by prisoners to escape from the facility by carrying out a truck bombing.

I suggest that Abbas Ibrahim negotiate with Nusra, etc for the release of our soldiers as he has a successful track record in dealing with them. He was successful in getting the 'pilgrims' released..

sounds logical they would send their man Jomaa to be arrested by the LAF in order to take LAF hostages to free inmates in Roumieh. Who said common sense is common these days.

really?
why are hundreds of men in jail for over 6 years without trial?
who is refusing to let them be tried? it is your hizbushaitan.
several of these guys are innocent, but they are used as a bargaining chip.
this is where oppressing people get you: these guys should be tried, and if found guilty, they should serve their sentence whatever it is, and if the sentence is death, then they should be immediately executed to end this sad story.
why keep illegal and oppressing open ended situations unfinalized?

How could HA eradicate them from Qalamoun and allow their entry in the thousands to Arsal?

Inshallah the the Lebanese soldiers and internal security personnel are released. How tragic for the Lebanese army, ISP and the community to be held hostage to groups like this.

@mcknl: are we still heading towards an economic abyss?

the right thing to do is to not negotiate with terrorists. even if the price is high. if they get negotiated with, then more hostages will be taken in the future and more demands will be made. they should not have been allowed to leave arsal at any cost. but nobody has the balls.

who did Abbas Ibrahim negotiate with to release your "pilgrims"?

please, don't talk to him like that.... he is a secular shia.

Who do they think they are? Hamas? and Lebanon is Israel?

I have a better suggestion, release the detained troops or come join the 20 Roumieh Islamists.

when you kidnapped turkish pilots, it also shows your pilgrims were guilty of their crimes. no?

Release the prisoners, get our soldiers and ISF members back, then chase them to the gates of hell.

If I have to choose between M8, M14 and Lebanon ...... Lebanon is always my choice.
I appreciate your input, moderation rules.

ALL countries discuss to get their citizens back... Get them back soon before Assad bombs them to worsen the situation...