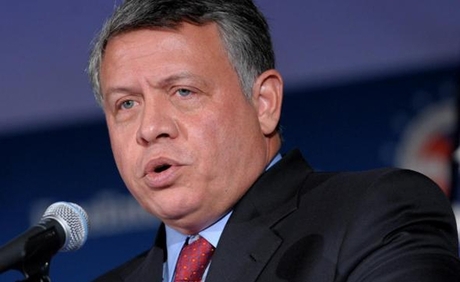 Jordan's King Abdullah II warned Sunday that Israel will only achieve security for its people through a peace settlement with the Palestinians leading to the establishment of their own state.

Abdullah's remarks came in an interview published by the independent Al-Ghad newspaper as the death toll from Israeli air strikes on the Gaza Strip rose and efforts to secure a ceasefire remained elusive.

The Jordanian king called the month-long Gaza conflict that has killed nearly 2,000 Palestinians "the bloodiest and most devastating in terms of casualties", and blamed Israel for the bloodshed.

"First and foremost, Israel is responsible for the aggression in the Strip," said Abdullah.

"Israel's security will not be achieved without a genuine pursuit of comprehensive just peace and the two-state solution," he said referring to a Palestinian state living side by side with Israel.

"This is the only way for Israel to guarantee its security and gain the acceptance of the region and the entire world."

Israel launched Operation Protective Edge on Gaza on July 8 to stop rocket attacks on its territory and later expanded it with a ground offensive to destroy a network of attack tunnels.

The conflict has now killed more than 1,900 Palestinians and 67 people on the Israeli side, almost all soldiers.

Jordan is the only Arab country along with Egypt to be bound by a peace treaty with Israel.

Egypt is mediating a ceasefire between Israel and the Palestinians.