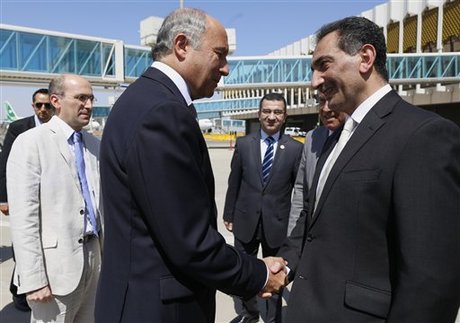 France is not planning to follow the United States in carrying out military action in Iraq, Foreign Minister Laurent Fabius said during a visit to the country on Sunday.

"The Americans have intervened in a useful way while specifying -- and they are right -- that they have no intention of sending ground troops," Fabius said at a televised joint press conference with Massud Barzani, the president of Iraq's autonomous region of Kurdistan.

"As for France, our support is currently humanitarian... France is not currently planning a military-style intervention," he said.

Fabius was in the Iraqi Kurdish city of Arbil to oversee the delivery of humanitarian aid to civilians who have fled the advance of Islamist fighters in the country's north.

Fabius denounced what he called a "Caliphate of Hate", in reference to the self-proclaimed authority imposed by jihadists in June over parts of Iraq and Syria under their control.

"(For) our friends in Kurdistan and elsewhere in Iraq, this is not only a battle for themselves but a battle for freedom that concerns us all," he said.

He also repeated a call made earlier in Baghdad for the "rapid establishment of a unity government" in Iraq to fight the jihadists.

I'm not surprise, Hollandish is a womanizer with big mouth and a big coward.