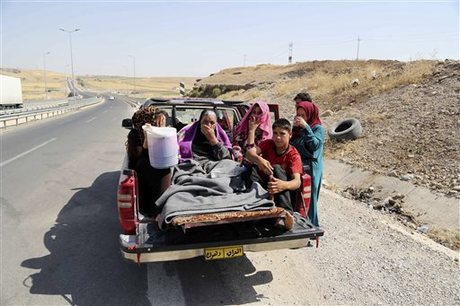 Thousands of displaced Iraqis who had been besieged on a mountain by jihadists escaped to safety Sunday while Western powers ramped up efforts to save those still stranded with air drops.

Three days after U.S. President Barack Obama ordered warplanes back in the skies over Iraq to avert what he said could be an impending genocide, France and Britain joined the humanitarian response.

An attack by extremist Islamic State (IS) militants on the Sinjar region a week ago sent thousands -- many of them from the Yazidi minority -- scurrying into a nearby mountain.

Stranded on Mount Sinjar in searing summer heat with little food and water, Yazidi lawmaker Vian Dakhil had warned Saturday that they would not survive much longer.

But on Sunday, she and other officials said at least 20,000 had managed to flee the siege, with the help of Kurdish troops, and cross into northern Iraq's Kurdistan region via Syria.

An official from the Kurdish regional government in charge of the Fishkhabur crossing point between Syria and Iraq said 30,000 had crossed, mainly Saturday and Sunday.

Foreign aid groups operating in the region confirmed several thousand survivors of the Mount Sinjar siege had transited through Syria and crossed back into Iraq.

Kurdish forces from Iraq, Syria and Turkey have worked together in a bid to rescue the displaced Kurdish-speaking Yazidis and other civilians trapped on the mountain.

The breakthrough appeared to coincide with U.S. airstrikes on IS fighters in the Sinjar area on Saturday.

U.S. and Iraqi cargo planes have been air dropping food and water over Mount Sinjar, a barren 60-kilometre (35 miles) ridge that local legend holds as the final resting place of Noah's Ark.

Britain joined the effort overnight Saturday with its first air drop over Sinjar of food and water.

"The world has been shocked by the plight of the Yazidi community," said International Development Minister Justine Greening.

French Foreign Minister Laurent Fabius also arrived in Iraq, where he briefly met officials in Baghdad before flying to Arbil, to oversee the delivery of France's first aid consignment.

The capital of autonomous Kurdistan is where much of the security and humanitarian response is being coordinated.

One of the key justifications Obama gave on Thursday for the first U.S. military operation in Iraq since the last US troops left the country in 2011 was the protection of US personnel in Arbil.

The jihadist group IS, which has controlled parts of Syria for months, took the main northern Iraqi city of Mosul on June 10, exactly two months ago.

It has since swept through much of the Sunni heartland and notched up devastating victories against federal and Kurdish troops, seizing Iraq's largest dam and causing mass displacement.

Over the past week alone, 200,000 people have been forced to flee from their homes, including all the residents of Iraq's largest Christian town Qaraqosh.

At pains to assure war-weary Americans he was not being dragged into a new Iraqi quagmire, Obama put the onus on Iraqi politicians to form an inclusive government and turn the tide on jihadist expansion which has brought Iraq closer than ever to breakup.

His comments were yet another nudge for Prime Minister Nuri al-Maliki to step aside and allow for a consensus government by abandoning what looks like an increasingly desperate bid to seek a third term.

"In this time, Iraq particularly needs a broad-based unity government because all Iraqis need to feel represented to wage the fight against terrorism together," he said.

The cash-strapped autonomous Kurdish region's peshmerga force has also struggled and turning Sunni Arabs against the jihadists is seen as the key to rolling back two months of losses.

"Given the humanitarian catastrophe we support the targeted action by the U.S.," he said. "The U.S. measures are important also to impede the further advance" of IS insurgents.

Obama did not give a timetable for the U.S. military intervention but said Saturday that Iraq's problems would not be solved in weeks. "This is going to be a long-term project," he said.

Kurdish and federal officials have welcomed the U.S. strikes as a much-needed morale boost and an opportunity to regroup and plan a joint fightback.