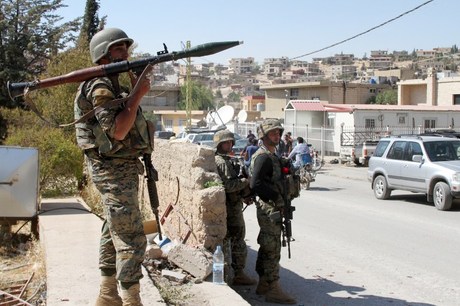 The Lebanese army deployed in strategic ares around the northeastern border town of Arsal on Sunday as the official death toll of residents in the battles with extremists stood at 16, the state-run National News Agency reported.

NNA said that the troops took position in the strategic locations of Wadi al-Hosn, Wadi Hmeid, Wadi Ata in the eastern sector, Ras al-Sarj and near the Rafik Hariri clinic at the town’s Western entrance to confront the danger that jihadists pose.

Other positions include the base of Wadi al-Rahyan and Sarj Hassan in the town's southern sector, the agency added.

Soldiers also carried out patrols inside Arsal and erected checkpoints to preserve security in the town from which militants withdrew to the rugged hills separating Lebanon and Syria on Thursday.

The gunmen overran the town last weekend upon the army's arrest of an al-Nusra Front member. The battles that ensued left scores of soldiers dead and injured.

At least 35 soldiers and policemen were held captive by the Islamist fighters. Their fate remains unknown after contacts were lost with them.

Meanwhile, Arsal residents said 16 civilians were killed in the fighting. Some of them died defending the military and security bases that were attacked on the first day of battles.

Around 100 residents were injured in the fighting, NNA said. Only a few of them were taken to hospitals in the Bekaa Valley for being in serious condition.

The damage to private and public properties was mainly in Arsal's northwest in the areas of Ras al-Sarj and the surroundings of Abou Ismail mosque.

Around 500 tents of Syrian refugees were burned, NNA added.

Meanwhile, Arsal residents said 16 civilians were killed in the fighting. Some of them died defending the military and security bases that were attacked on the first day of battles..........
RIP along with the soldiers you were defending.

In the meantime our beloved Hezbcocaine, is defending the Alawite dictator in Syria..

And if the LAF fought HA you will still call HA "the resistance" and you will call the LAF as sold out and traitors.

You weazeled your way out of a direct answer to my supposition.

Yes of course Southerner. And the best way to do so is for the arms to give its arms to the LAF and pledge allegiance to it.

A most curious military campaign. A smaller ISIS force in a smaller area at Nahr Bareed took over 6 weeks of heavy combat by the LAF to dislodge.
This force was reported to have been over 6,000 fighters holding an area much larger than Nahr el Bareed, and yet they gave up after less than 1 week, followed directly by the return of Hariri with $1.0 billion in hand.
Now the LAF is very good. Our boys are the best in the world, but we do not have the equipment or the store of ammunition or airpower to bring about such a decisive result so quickly. And notice how this defeat was not reported anywhere, even as the collapse of the Persh merga before ISIS was reported widely.

Its all very curious.