EU: Violence in N.Iraq could Constitute Crimes against Humanity 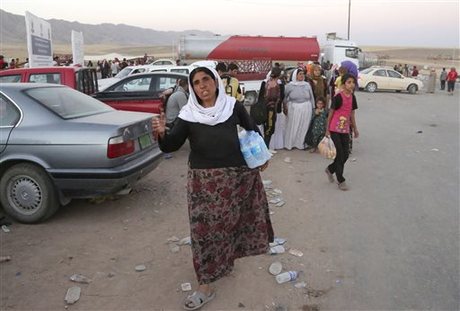 Violence in the north of Iraq which has forced hundreds of thousands of people to flee their homes could constitute "crimes against humanity," the European Union said Sunday.

EU foreign policy chief Catherine Ashton said in a statement that members of the block "strongly condemn" attacks by militants from the Islamic State (IS) as well as by other armed groups in the country.

"We are appalled by the rapid deterioration of the humanitarian situation with hundreds of thousands civilians, mainly from minorities, fleeing the areas of conflict as a result of persecution and violation of basic human rights," the statement said.

"Some of these acts may constitute crimes against humanity and must be investigated swiftly, so that the perpetrators are held accountable," it added.

Ashton also called on all parties to "abide by international humanitarian law, ensure humanitarian access and facilitate the delivery of assistance."

An attack by IS militants on Sinjar region a week ago sent thousands of civilians -- many from the Yazidi minority -- fleeing to nearby Mount Sinjar, where they faced searing summer conditions with little food and water.

On Sunday, a Yazidi lawmaker said at least 20,000 had managed to escape the siege three days after US President Barack Obama authorized air strikes to prevent a possible genocide.

Christians have also been forced to flee northern regions overtaken by IS, and on Thursday around 100,000 were forced to abandon the city of Qaraqosh, which had Iraq's largest Christian population.