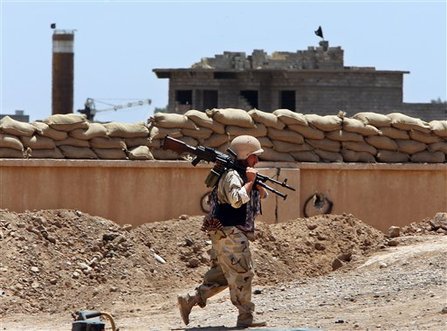 EU ministers agreed at an emergency meeting on Friday to back the arming of overwhelmed Iraqi Kurdish fighters in the face of an onslaught by Islamic State militants.

Ministers were gathered in Brussels in a rare summertime meeting facing calls to step up efforts to stop what Germany said was a slaughter of civilians.

"Iraq is on the brink of a true catastrophe. A million people in Iraq are fleeing their homes," German Foreign Minister Frank-Walter Steinmeier said.

"In northern Iraq, in the Kurdish part, Yazidis and Christians are being persecuted and slaughtered."

The meeting was called at the urging of France and Italy, which said the situation in Iraq required urgent attention.

The ministers said they welcomed "the decision by individual member states to respond positively to the call by the Kurdish regional authorities to provide urgently military material".

"Such responses will be done according to the capabilities and national laws of the member states, and with the consent of the Iraqi national authorities," they said.

France has already begun to provide weapons to beleaguered Iraqi Kurdish forces with Britain also ready to do so.

But French Foreign Minister Laurent Fabius said an EU-wide response to the crisis was crucial.

Much of the military equipment used by the Iraqi Kurdish forces dates back to the Soviet-era, a European official said, which in the short-term could be easily replenished by eastern European arms makers.

Defense matters are strictly the purview of member states, and the EU approval for member states to send arms to a conflict zone is rare.

A diplomat said the agreement was "strong and sends the desired political message" to the world.

Alarming images of Iraqi minorities, including Christians, under siege by jihadists have struck chords in European capitals.

EU governments are also concerned by the Islamic State's ability to attract radicals from Europe who then return home to the West battle-hardened.

Ahead of Friday's meeting, support for a strong message backing Iraqi Kurds was growing, even from member states historically less inclined to support military adventures abroad, such as Germany.

"We have found a common position, the spirit of which says the EU commends the fact that certain countries have responded favorably to the request made by Kurdish Iraqi forces," Steinmeier said.

Before the talks, some countries continued to resist the idea of sending weapons to an unstable war zone where fighters and weapons can quickly change sides.

Usually cautious Germany this week pledged to work "full-speed" on the supply of "non-lethal" equipment such as armored vehicles, helmets and flak jackets to Iraq.

Germany is a major arms manufacturer and going into the meeting, Steinmeier said the country was ready to boost its commitment to Iraq despite national restrictions limiting arms exports into raging conflicts.

"Europeans must not limit themselves to praising the courageous fight of the Kurdish security forces. We also need to do something first of all to meet basic needs," he said.

The ministers also said they would explore ways to prevent the sale of oil by IS militants, which has become a lucrative source of revenue, and condemned "those funding" the group in violation of U.N. resolutions.

Current EU foreign policy chief Catherine Ashton, who convened the meeting, had been criticized earlier in the week for the bloc's slow response to the unfurling crisis in Iraq.

But a senior European official, speaking on Thursday in the run-up to the talks, deplored the "distorted" view of a shut-down EU in August.

This was "at best unfair", he said. The European Union "is not on holiday".