IS Killed More than 700 Syria Tribe Members in 2 Weeks 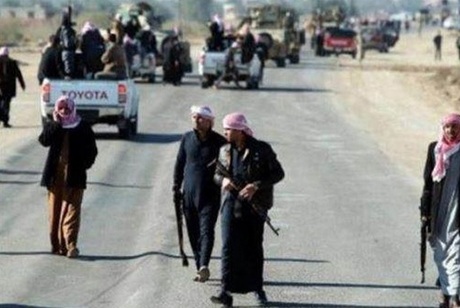 Jihadists have killed over 700 tribal members in eastern Syria, monitors said Saturday, and are battling to seize a northern rebel bastion, sparking an appeal for an Iraq-style Western intervention.

The Syrian Observatory for Human Rights said the Islamic State (IS) jihadists have carried out the killings over the past two weeks in oil-rich Deir Ezzor province which the group mostly controls.

Among the members of the Shaitat tribe killed were 100 fighters, but the rest were civilians, the Britain-based monitoring group said.

They were killed in Ghranij, Abu Hamam and Kashkiyeh villages, said the Observatory, which relies on a vast network of activists and medics on the ground for its information.

Observatory head Rami Abdel Rahman said the fate of 1,800 other members of the Sunni Muslim tribe was unknown.

Fighting between the jihadists and the tribe erupted after a deal between them collapsed, with the Shaitat refusing to bow to IS authority.

The IS has captured most of Deir Ezzor and declared it to be part of its "caliphate," along with large swathes of territory it has captured across the border in Iraq.

The Observatory said the Shaitat had vowed not to oppose the IS, in exchange for the jihadists not harassing or attacking its members.

But the IS had detained three members of the tribe, "violating" the agreement.

In northern Syria, rebels on Saturday were defending one of their main strongholds near the Turkish border against a rapid IS advance, the Observatory and an activist said.

The opposition Syrian National Coalition (SNC), meanwhile, called for the US military to carry out air strikes on IS positions not only in northern Iraq but also in Syria.

IS fighters were nearing the towns of Marea and Aazaz, held by rebel groups battling Syrian President Bashar Assad's regime, after seizing a number of villages in Aleppo province.

Abu Omar said the jihadist group, which is also currently being targeted by U.S. air strikes as it battles Western-backed Kurdish forces in northern Iraq, is using heavy weaponry it seized when it routed the Iraqi army in June.

At a news conference on Saturday in Gaziantep, southeast Turkey, SNC leader Hadi al-Bahra appealed for Western intervention, after previous requests for military aid against regime forces were thwarted.

"In the name of humanity, I call on the United Nations and all countries which believe in freedom, starting with the United States, to take action in Syria the same way as it did in Iraqi Kurdistan," he said.

"The causes are the same, the enemy is the same, and double standards should not apply," said the leader of the exiled opposition group.

The Marea battle comes after IS fighters took control of around 10 nearby villages on Wednesday and Thursday, the Observatory said.

Aazaz, next to a border crossing with Turkey, would be a valuable asset for IS as it seeks to expand its self-declared "caliphate" in the territories it holds in Syria and Iraq.

IS emerged from al-Qaida's one-time branch in Iraq, and initially fought alongside Syria's opposition, including more moderate rebels and other Islamist fighters.

It is time to bring the Crisades back and wipe out all of the fundamentalist Islamic groups in the Middle East.

The crusaders were these fundamentalist lunatics. What we need is to build a representative system of governance that is strong and that protect the rights of people.

Q: why did bashar assad let the jihadis out of jail
A: so they fight the rebel for him