Bassil: We Reject Iraqi Refugees, ISIL will be Defeated 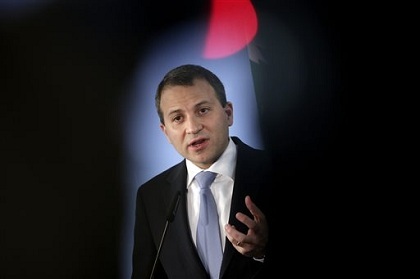 Foreign Minister Jebran Bassil said on Monday that Lebanon rejects to welcome Iraqi refugees, asking them to remain in their land.

“Calls to welcome displaced Iraqis are rejected. We urge them to stay in their land,” Bassil said during a joint press conference with his Iraqi counterpart Hussein al-Shahristani in Baghdad.

But we welcome Iraqi tourists in Lebanon, he said.

Bassil said the Islamic State in Iraq and the Levant (ISIL), now named Islamic State, will be defeated in Iraq, but warned that its extremist thoughts could remain.

“What will happen after ISIL? Is it going to be fed intellectually and financially?” he asked.

Bassil also warned that the Christians in the Middle East were under threat.

The militants have declared a "caliphate" straddling vast areas of Iraq and Syria.

Human rights groups and residents say IS fighters have been demanding that religious minorities in the Mosul region either convert or leave, unleashing violent reprisals on any who refuse.

Members of minority groups including the Yazidis, Christians, Shabak and Turkmen, remain under threat of kidnapping or death at the hands of the jihadists.

“If things remain the way they are, then the Christians will be under threat not just in Mosul but in the entire Orient,” Bassil said.

For the second time i did not write the post hereabove. It seems that nanaharnet is playing with my username to create confusion. But don't worry, we all know how this 'paper' is manipulating its ''readers'' !!!

well he is the minister of foreign affairs!

I actually like his language here. IS is not a threat to the Lebanese. We half Christian moderate Sunnis and Shites that make up the overwhelming majority, the radical elements do not share any support and hence whilst they are bothersome and dangerous do not foster the right conditions for IS to take a foothold. His language is similar to that of Heagea's on the topic. Shame aoun and hussouny have claimed the sky is falling down in order to justify HA invasion of Syria.