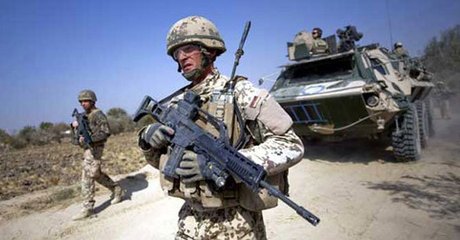 A NATO soldier was stabbed to death on the streets of Kabul on Wednesday, officials said, in an unusual attack that highlighted hostility to foreign troops who are withdrawing from the country.

The soldier, whose nationality has not been released, was attacked when a coalition convoy was held at a police checkpoint on the road from the airport into the center of Afghan capital.

"A man stabbed the foreigner in his neck," Nisar Ahmad, a district police officer on duty, told Agence France Presse. "He was rushed to hospital."

Police later said a man with suspected links to the Taliban had been arrested and was being questioned.

NATO's International Security Assistance Force (ISAF) issued a statement saying that "a service member died of wounds as a result of an attack in eastern Afghanistan today."

Kabul is in the east of Afghanistan, and ISAF does not give exact locations of attacks.

NATO soldiers are rarely seen on foot in Kabul, but their heavily-protected vehicle convoys have often been targeted by suicide bombers.

An official from the city police investigation department said the NATO convoy of fuel tankers was held at the checkpoint.

"While the police were checking their documents, a young man attacked one of the foreigners and stabbed him," he said.

All combat forces will withdraw before the NATO mission finishes at the end of this year. About 10,000 U.S. troops are likely to stay on in 2015 for a training and counter-terrorism mission.

The most recent attack on foreign forces in Kabul was earlier this month when a suicide bomber targeted a NATO convoy.

No NATO soldiers were hurt, but four civilians were killed and 35 wounded.