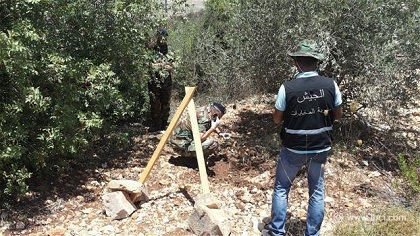 The Lebanese Army found on Monday night a launchpad in the southern Marjeyoun al-Jarmaq area that was used to launch missiles into Israel, the army said in a communique on Tuesday.

"The Lebanese army executed a thorough inspection in the al-Jarmak valley area after unknown assailants fired rockets into the Palestinian territories from the said location,” the communique added.

After a close investigation, the army said that only one rocket was fired from the platform while another was prepared for launching.

NNA said that the rocket was dismantled later by the Lebanese army weapon engineers.

The army kicked off investigations to find the perpetrators.

Israel intensified its patrols along the border line starting from al-Adaysseh extending to the Shebaa and Kfarshuba hills which triggered tension.

Meanwhile the UNIFIL executed patrols along the blue line.

On Sunday, two rocket launchpads were found in the southern region of Tyre, from which two rockets were fired overnight Saturday at northern Israel.

The two rockets were fired on the 47th day of an Israeli war against the Islamist movement Hamas in the Palestinian Gaza Strip.

Palestinian groups go fight your fight in your country and leave us alone..we have enough fr uu..