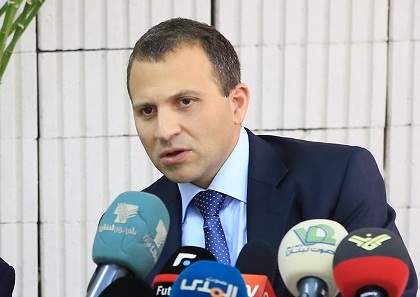 Foreign Minister Jebran Bassil denied claims that an ambassador, whose identity was not disclosed, had requested that he play the role of mediator to facilitate holding the presidential elections, reported An Nahar daily on Tuesday.

He told the daily: “I am not a mediator in this affair.”

“I am the most inflexible member of the Free Patriotic Movement” and therefore cannot act as mediator, he explained.

“I adopt a strict position and therefore am not in a position to be approached to serve as a facilitator,” stressed the minister.

Bassil revealed that he was approached to play such a role, but he turned it down due to his stances.

Numerous elections sessions were held, but the majority of them failed due to a lack of quorum at parliament caused by a boycott of the March 8 camp's Loyalty to the Resistance and Change and Reform blocs.

The boycott stems from a dispute over a compromise president.

Head of the Change and Reform bloc MP Michel Aoun has repeatedly said that he would be willing to run in the elections if there was consensus over him.

His rival in the March 14 alliance and presidential candidate Lebanese Forces chief Samir Geagea has accused the lawmaker and his bloc of obstructing the polls as a form of blackmail to impose his nomination and election.

“I am the most inflexible member of the Free Patriotic Movement” and therefore cannot act as mediator, he explained.

How can a Foreign minister say this? As a Lebanese member of parliament he is not allowed to take sides... what a joke.....

6 flamethrowers have cast their votes already;)

bassil we want u president..myb it will solve the impass..

HahHahH porto they don't even want him president of FPM after Aoun shuffles off! It's all over the medias.

The most inflexible member of the FPM? So that means in terms of flexibility, Aoun takes a backseat to him? It's hilarious how our foreign minister talks like this. He's almost as funny as Mansour.