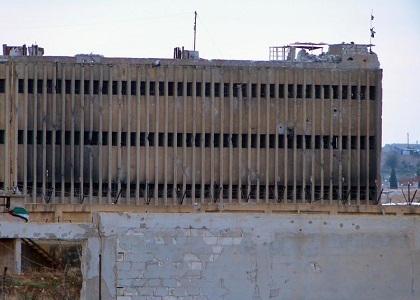 Dozens of organizations in a joint statement on Friday demanded the immediate release of three prominent Syrian rights activists including journalist Mazen Darwish, who have been held since February 2012.

"The Syrian government should immediately and unconditionally release the arbitrarily detained human rights defender Mazen Darwish" and his colleagues Hussein Ghreir and Hani Zaitani, said the statement signed by 79 groups including Human Rights Watch, Amnesty International and Reporters Without Borders.

The three men, who worked for the Syrian Center for Media and Freedom of Expression (SCM), have been in jail since a security forces raid on the group's Damascus office more than two and a half years ago.

They are accused of "publicizing terrorist acts" under Syria's sweeping and controversial anti-terrorism law.

According to Friday's statement, "The charges are based on their peaceful activities that include monitoring and publishing information about human rights abuses in Syria."

An unidentified spokesman for the rights groups was quoted in the statement as saying the allegations against the three men were "nothing more than a sham, and a deep miscarriage of justice".

Despite multiple calls for their release by rights groups and the United Nations, Syria's anti-terror court is expected to issue a verdict in the case on September 24.

The men have been kept in custody despite President Bashar Assad on June 9 announcing an amnesty.

While tens of thousands of prisoners detained over the course of Syria's revolt had been expected to be set free, lawyers say that only several hundred people actually benefited from the amnesty.

"The families of SCM members hoped that their relatives would be released under the amnesty," the spokesperson said.

"But the Syrian authorities have once again proven that they are not capable of abiding by even their own publicly proclaimed amnesty."

A revolt broke out in Syria in March 2011, demanding Assad's ouster.

It began as a peaceful protest movement, but later morphed into a savage civil war after the regime unleashed a massive crackdown on dissent.

Instead assad released lokman and 500 others islamists fanatics in 2011, u know like our dear shaker el abssi also freed by assad for good conduct and sent to lebanon...
Go figure....
Bass mowaten, flame and co will come tell us how democrate, progressist, secular assad is, and above all how he has nothing to do with those islamists...
Yalla again chupachups for all...

For info lokman is now isis leadder in damascus area, as for shaker el abssi i think lebanese still remember him... Are u lebanese flame?...