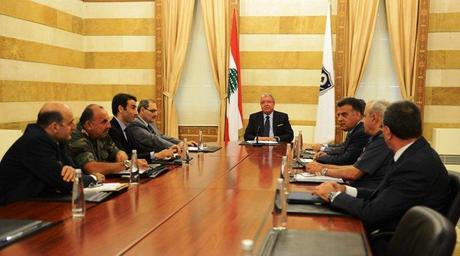 Interior Minister Nouhad al-Mashnouq headed on Tuesday a meeting for the Central Security Council to discuss the readiness of security forces to oversee security during the upcoming parliamentary elections.

The meeting, according to the state-run National News Agency, focused on the security situation in the country ahead of the polls that are expected to be staged in November.

Mashnouq demanded head of security apparatuses to provide him with detailed reports within a week to evaluate the security situation.

Last year, the rival MPs extended their tenure until November 2014 after they failed to agree on a new electoral draft-law.

However, the current presidential vacuum, which is caused by a sharp rift between political arch-foes on the name of the successor of former president Michel Suleiman, whose tenure ended in May, threatens the fate of the parliament.

There are fears that the political crisis and vacancy at the presidency could lead to vacuum in the remaining political institutions.

The cabinet had recently appointed the members of the committee that will oversee the upcoming parliamentary elections, naming ex-judge Nadim Abdul Malak as its head.

So far around 289 candidates submitted their nominations to run in the upcoming parliamentary elections.

Those who wish to run in the elections must submit their candidacies before midnight on Tuesday.